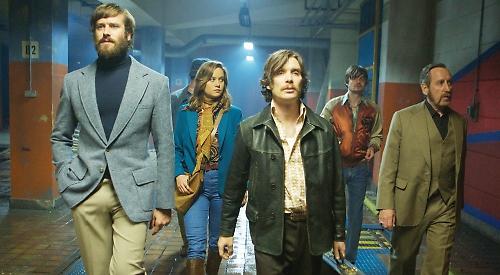 WITH virtually a film a year to his name since his award-winning 2009 debut Down Terrace, it’s hard to think of any director whose upward trajectory has been as relentless as that of Billericay-born Ben Wheatley.

Highlights along the way have included 2011’s hilarious Sightseers, which one critic called “a comedic blend of Natural Born Killers and the National Trust”.

Then there was 2013’s A Field in England. The English Civil War on magic mushrooms. In black and white.

That made a few people sit up, but it’s Wheatley’s latest effort, Free Fire, that is being touted as his Hollywood calling card — his entrée into the big leagues — and his most accessible film to date.

Given that Free Fire is executive-produced by Martin Scorsese, you might well argue that Wheatley is already sat at the top table.

But the wonderful thing about cinema is that there is no upper limit to what can be achieved once the biggest talents are able to secure the freedom they need in terms of financing and “final cut”. Witness one Stanley Kubrick.

Back to Wheatley and Free Fire, which also happens to be the first film of his that he has written as well as directed since 2011’s Kill List.

An exhilarating, trigger-crazed crime thriller set in Seventies Boston — but actually shot on the gritty outskirts of Brighton, the home town of Wheatley and his wife and co-writer Amy Jump — Free Fire brings together a fabulously eccentric gang of characters for a shady arms deal in a derelict warehouse.

Justine, played by Oscar winner Brie Larson, has brokered a meeting between two Irishmen, Chris and Frank (Cillian Murphy and Michael Smiley), and a consortium led by a Savile Row-suited South African called Vernon (Sharlto Copley) and a smoothly mysterious American called Ord (Armie Hamer) who are selling them a vanload of artillery.

Add in a fistful of other sharply drawn oddballs, including short-fused henchmen Stevo (Sam Riley) and Harry (Jack Reynor), and what you’ve got is a testosterone tinderbox just waiting to blow.

With combustible conflict at every turn, it’s merely a question of which spark will ignite the mother of all shoot-outs.