I talked baby blues with Duchess 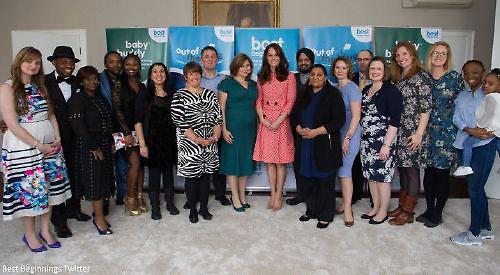 A WOMAN from Henley who starred in a series of films about mental health during pregnancy and parenthood met the Duchess of Cambridge to talk about her experiences.

Emma Taylor, who suffered five miscarriages in less than four years, appeared in the Out of the Blue series, which explored antenatal and postnatal depression among women.

She spoke on camera about postnatal depression following the birth of her first child, Lilia, now aged seven.

The films were produced by children’s and mental health charities Best Beginnings and Heads Together, of which the Duchess is a patron along with the Duke of Cambridge and Prince Harry.

They were used for a mobile phone app called Baby Buddy.

As a result of the project, Mrs Taylor was one of seven women chosen to speak to the Duchess about perinatal mental health, which affects around one in 10 women during pregnancy or in the first year after having a baby.

She travelled to London to meet the Duchess, who has two children, George, three, and Charlotte, one, at the Royal College of Obstetricians and Gynaecologists.

Mrs Taylor, 42, who lives in Western Avenue with her husband Andy, Lilia and her two-year-old son Gabriel, said the meeting took place around a coffee table.

“In a speech earlier, she had talked about the difficulty of being a mum, even for someone like her. She indicated that she had found it difficult too.

“She had watched all the films and she seemed really nice and genuinely interested to be there. She had a good knowledge of the films and came across as sympathetic and understanding. She was very lovely.”

The event was held the day after the Westminster terror attack just over two weeks ago but Mrs Taylor said she was more nervous about meeting the Duchess than travelling to London. She said: “I did think it might be cancelled because of the attacks and it was brave of her to come. I worked in London for years and you can’t let things like that stop you from getting on.

“I was a bit apprehensive about meeting the Duchess because I thought there would be a lot of protocol about it.

“Actually it was just sitting on the sofa and waiting for her. She didn’t require any special treatment.”