Nobody's going to pension this lot off 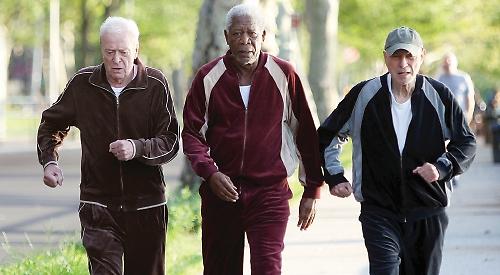 IMAGINE working hard all your life and being set for happy retirement before a bunch of unscrupulous bankers abscond with the very pension you worked for.

Would you do whatever it takes to get it all back?

It seems the three men in this heist thriller are out to prove you’re never too old to get even.

Returning to the director’s chair for the first time since 2014’s Wish I Was Here, Zach Braff is back with his latest effort, crime caper Going in Style.

Braff is best known for his role as daydreamer JD in Scrubs, and is well remembered for his imagining of surreal and often, weird scenarios.

But here the actor turned director has set out his own vision for a remake loosely based on a 1979 blockbuster of the same name that starred George Burns and Art Carney.

Going in Style follows the story of three retired pals played by Hollywood legends Michael Caine, Morgan Freeman and Alan Arkin, all of who are desperate to pay the bills after they are robbed of their pensions by duplicitous ex-employers and their bankers. A topical update, if ever there was one.

As a result the three senior citizens are living off social security cheques and are even reduced to eating dog food before they decide enough is enough.

Caine, who recently celebrated his 84th birthday and shows no signs retiring in real life, stars as Joe — who is inspired after witnessing a bank robbery.

In a desperate attempt to claim back the money that once belonged to them, the three friends decide to embark on a life of crime. Trouble is, none of them know how to handle a gun.

The film also features two-time Oscar nominee and Sixties icon Ann-Margret as grocery cashier Annie and John Ortiz as a man of unspecified credentials who agrees to show the pensioners the criminal ropes.

With a sharp script from Theodore Melfi, who also wrote Hidden Figures, and perfect comic timing from the three principals — who have a combined age of 246 years — Going in Style certainly isn’t lacking in
hard-won experience.

The consequences and gags maybe fairly obvious at times,but audiences can expect a fast-paced crime caper packed with entertainment and excitement which is underpinned with a serious message about the underdogs fighting for what’s theirs in a callous capitalist society.