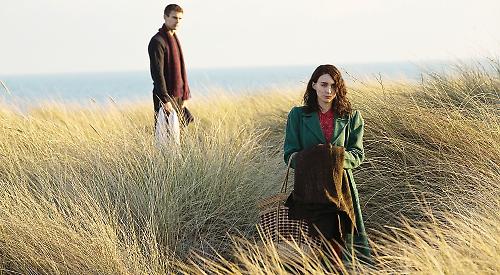 Returning to the Irish homeland that provided the settings for his greatest achievements, director Jim Sheridan (My Left Foot, In The Name Of The Father) delivers a powerful, beautifully realised emotional drama based on Sebastian Barry’s 2008 novel.

It’s the story of Rose (Redgrave), the sole remaining inhabitant of a decrepit psychiatric hospital, who relives the tragic circumstances that sent her there in the titular secret diary.

In the process we meet her younger self (Mara, never better) and the priest (James) who was complicit in her incarceration.

The Secret Scripture is an Irish film, directed by Jim Sheridan, from a screenplay by Sheridan and Johnny Ferguson, which is based on the 2008 novel of the same name The Secret Scripture by Sebastian Barry. The film stars Vanessa Redgrave, Rooney Mara, Eric Bana, Theo James, Aidan Turner, and Jack Reynor.

Amazon: Nearing her one-hundredth birthday, Roseanne McNulty faces an uncertain future, as the Roscommon Regional Mental hospital where she's spent the best part of her adult life prepares for closure. Over the weeks leading up to this upheaval, she talks often with her psychiatrist Dr Grene, and their relationship intensifies and complicates. Told through their respective journals, the story that emerges is at once shocking and deeply beautiful. Refracted through the haze of memory and retelling, Roseanne's story becomes an alternative, secret history of Ireland's changing character and the story of a life blighted by terrible mistreatment and ignorance, and yet marked still by love and passion and hope.

Amazon review...
Roseanne McNulty may (or may not) be on the point of nearing her 100th birthday -- but there is little certainty about this fact. In her twilight years, her destiny is uncertain, as the Roscommon Mental Hospital -- her home for so many years of her life -- is on the point of closing. As the fateful hour approaches, Roseanne spends her time of talking to her psychiatrist of many years, Dr Grene. The relationship between the two is strangely interdependent, and the doctor is also attempting to come to terms with the death of his wife. As we learn more about the two principal protagonists, we are presented with a rich and subtle picture of human relationships -- and the (often unintentional) damages that we all do to each other.

The form of the book consists of the separate journals of Roseanne and Dr Grene, and we gradually learn about Roseanne’s family in Sligo in the 1930s. What emergence is a poignant personal history; it is also a subtly ambitious picture of nothing less than the Irish psyche at a particular point in its history. There are echoes here of another great Irish chronicler of the human condition, William Trevor, and The Secret Scripture is no worse for that. --Barry Forshaw