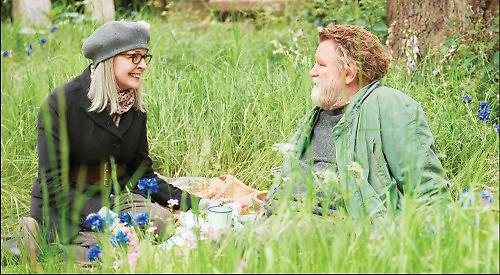 IT’S nearly 20 years since the writer and director Richard Curtis successfully followed up his 1994 smash-hit Four Weddings and a Funeral with Notting Hill.

Sadly, despite a plentiful supply of suitably resonant-sounding London postcode areas — Crouch End, Tufnell Park, Cockfosters — a sequel was never in the offing.

Fans of Curtis’s syrupy brand of middle-class romantic comedies of manners instead had to settle for 2003’s Love Actually, while the great man also
co-scripted the first two Bridget Jones films in 2001 and 2004.

The template having been established, it’s safe to say there’s nothing film folk love more than a successful formula — even if their feelings aren’t always shared by the people actually buying the tickets.

Which brings us to Hampstead, a narrative loosely — let’s make that “very loosely” — inspired by the true story of vagrant Harry Hallowes.

In 2007 Mr Hallowes was awarded the deeds to a £2million plot of land on the edge of Hampstead Heath where he had lived for 20 years in a lean-to shack he had built himself.

So much for the fact, now for the fiction.

While looking out over the unspoiled parkland of Hampstead Heath from her attic window, American widow Emily Waters (Diane Keaton) finds herself calling the police when she sees an unkempt man, Donald Horner (Brendan Gleeson), being attacked by thugs outside a ramshackle hut.

Curious about the man she helped save from afar, she ventures out the next day to visit him and discovers that he has lived wild on the heath for 17 years.

As ruthless property developers adopt increasingly heavy-handed tactics to evict Donald from the area he calls home, an unlikely friendship — and then a romance — begins to blossom.

In the wake of Notting Hill’s success the area quickly became flooded with foreign tourists keen to see the locations for themselves. It remains to be seen whether Hampstead Heath will be likewise frequented.

But if Hampstead is in some way an attempt to do for Hampstead what Notting Hill did for Notting Hill, it may be worth bearing in mind that the latter’s success later inspired a novel called Notting Hell.