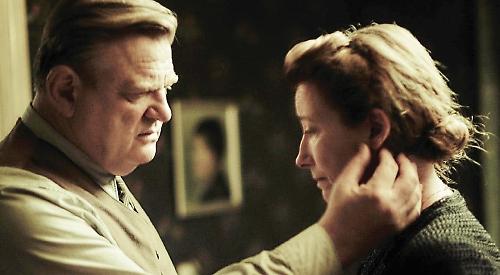 Director Vincent Perez’s portrayal of the Nazi capital demonstrates how the horrors of war impact on the lives of ordinary people.

Otto and Anna Quangel (Brendan Gleeson and Emma Thompson) are a working class husband and wife doing their best to ride out the war.

When their son is killed fighting on the front line, however, everything changes.

They begin pouring their rage and grief into a series of anonymous anti-Nazi postcards, risking everything to disseminate their messages of protest across the city.

But this seemingly small act of subversion rattles the regime — including a Gestapo inspector (Daniel Brühl) who will not rest until the culprits have been caught.

So begins a murderous game of cat and mouse.

Alone in Berlin is based on Hans Fallada’s 1947 bestselling novel, which was hailed by Holocaust survivor Primo Levi as “the greatest book ever written about German resistance to the Nazis”. Although somewhat fictionalised, the story is based on the real lives of Otto and Elise Hampel.

In the film, an additional impetus for the couple’s growing resistance to Hitler and his regime is the fate of an old Jewish woman living in their building.

Though the official deportation of Jews to death camps had not yet started, Jews have no recourse to any legal protection. Ruthless Nazis and non-ideological criminals use the opportunity to loot the old woman’s apartment with impunity.

Despite the efforts of the Quangels and other kind neighbours to help her, the persecution ends with the old woman jumping to her death.

Horrified, Otto starts writing postcards to urge people to stand against Hitler and the Nazis and protest against them. The first card, which he furtively places in public places, reads: “Mothers, Hitler will kill your son too.”

At first, Otto’s protest is a solitary one, but he is unable to deter Anna from taking part, despite warning: “They hang women too!”

First released in Germany last year, the film was nominated to compete for the Golden Bear at the 66th Berlin National Film Festival.

Perez as director brings his own family background to bear — his grandfather was shot by fascists in Spain, his great uncle was murdered by the Nazis in a gas chamber, and another uncle died fighting on the Russian front — giving this true-life tale a strongly naturalistic flavour.