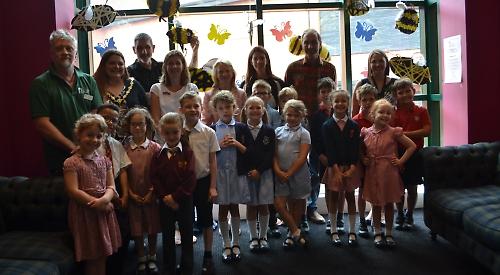 MORE than 100 children enjoyed a screening of a film about bees at the Regal Picturehouse in Henley.

Henley in Bloom combined with the cinema, in Boroma Way, to get children from Sacred Heart, Trinity and Badgemore primary schools to watch Bee Movie.

Before the screening on Tuesday they were given a talk by Nigel Eddon, from Honeys of Henley, about why bees are important to the environment and how they produce honey.

Mr Eddon, who runs the business with his wife Jo, told the children about the construction of a beehive, the life cycle of a bee and the different types of bee.

He also answered questions from the children.

After the screening each child was given a goodie-bag which included a small pot of Mr Eddon’s honey, a workbook on bees and sweets. A batch of goodie-bags will be taken to Valley Road Primary School, as its students were unable to attend the screening.

The scheme is part of Henley in Bloom’s 2017 theme of bees. The project included children from the schools making bees to be displayed in the cinema.

Henley Mayor Kellie Hinton, chairwoman of Henley in Bloom, said the fun day for the children also fitted with the group’s theme for the year.

She said: “The Regal offered to help us to provide an end of term treat for the children and make it educational whilst fitting it in with our bee theme.

“The children in year two at each of the schools made bees and they were put up at the cinema.

“The film was suggested by Paula Price-Davies at the town hall and the Regal said that was possible. IBS Office Solutions printed the booklets, which will help the children remember the educational aspects.”

Pollen-rich plants have been used in the hanging baskets found around the town this summer as part of the theme.

This includes 237 bought by residents, shops, businesses and community groups as part of the Buy a Basket campaign run with the Henley Standard.

Melissa Macfarlane, general manager of the cinema, which has two baskets, said: “We wanted to get more involved with the local community and when we heard about Kellie supporting the town’s primary schools we thought this would be a great way to support them.”

She added: “The theme gave a great opportunity to show the Bee Movie to the children and give them an end of term treat.”