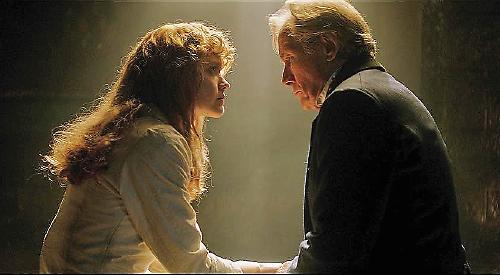 HE famously wrote the biography of London, but an adaptation of one of Peter Ackroyd’s most celebrated novels set in the city is about to hit cinema screens.

A murder-mystery framed within a story featuring real historical characters, it led one reviewer to declare that “Ackroyd has pulled off the greatest coup of all — a foursquare crime novel as aesthetically pleasing as it is morally shocking”.

Set on the unforgiving streets of Victorian London in 1880, the film opens in the baroque, grandiose world of the music hall, where the capital’s most renowned performer Dan Leno (Douglas Booth) is holding forth on the ghastly fate of a young woman who had once adorned that very stage — his dear friend Elizabeth “Lizzie” Cree (Olivia Cooke).

It turns out that the beguiling songstress is facing death by hanging, having been accused of murdering her husband John Cree (Sam Reid).

Lizzie’s death seems inevitable, until Detective Inspector John Kildare (Bill Nighy) is assigned to the case of the Limehouse Golem — a nefarious serial killer who slays innocent, unconnected victims, leaving behind barely identifiable corpses — and a distinctive signature in blood.

The series of murders has shaken the East End to the point where people believe that only a legendary creature from dark times — the mythical so-called Golem — must be responsible.

Nighy’s detective is astute and erudite, but his career is going nowhere. To make matters worse, the case of the Golem seems uncrackable.

But when the accusations against Lizzie Cree come to his notice, Kildare starts to suspect that clearing her name will bring him closer to the truth.

Told in flashbacks chronicling Lizzie’s rise through the seamier habitats of showbiz, this Victorian murder-mystery keeps us guessing throughout.

All is not what it seems, everyone is a suspect, and everyone has a secret.

With a stellar cast, audiences can enjoy looking out for cameos from the likes of Eddie Marsan (Happy-Go-Lucky) and feted Spanish actress Maria Valverde (Exodus: Gods and Kings).

The Limehouse Golem is showing at Henley’s Regal Picturehouse cinema from today (Friday).