Ice, fire, and a clash of the tennis titans 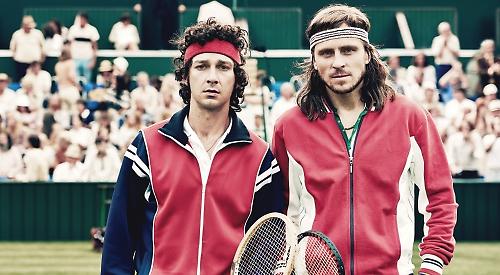 IT’S not known whether Game of Thrones creator George RR Martin is a tennis fan. One tends to suspect not.

But with the series of epic fantasy novels that inspired the series, A Song of Ice and Fire, still a work in progress, he could do a lot worse than to check out Borg vs McEnroe as a possible source of inspiration.

“Fire and ice” being the famous description of the
on-court rivalry between Björn Borg and John McEnroe that is the subject of this film.

Polar opposites in style, demeanour, appearance and temperament, theirs was a clash of the titans that had everything.

Borg was a disciplined, ascetic Swede, with the focus of a monk and the hair of a Viking, while McEnroe was a brash trash-talker from New York with a reputation for flouting decorum, hectoring officials and throwing both tantrums and rackets.

Things came to a head at Wimbledon on July 5, 1980, when the pair contested what is widely regarded as one of the greatest tennis finals of all time.

Borg, the defending champion, had won the previous four championships at the All England Club — an unmatched feat in the professional era.

He had also doubled up by winning the 1978 and 1979 French Opens — something which no other player has got close to doing since.

Later on in his career, during the 1984 season, McEnroe would record a win rate of 96.5 per cent — 82 games won with three lost — that remains unequalled to this day.

We are dealing here with true greats who together produced one of the most thrilling sporting spectacles ever seen on these shores.

As their epic confrontation approaches, the film sees both men delve into their formative memories to find the strength and the answers they’ll need.

As much a character study as a sports movie, Borg vs McEnroe sets out to strip bare the personalities and inner demons that would shape one of the most riveting dramas in tennis history.

It also features arguably this year’s most fascinating piece of casting: Hollywood bad boy Shia LaBeouf in the role of tennis’s legendary Superbrat — whose “You cannot be serious!” rant even inspired a top 20 single.

Yet this is not the only coup in Janus Metz Pedersen’s drama, which also features Borg’s son Leo playing his father as an adolescent, Borg’s father Rune in a cameo role, and Stellan Skarsgård in his first Swedish film since 2008.

On this evidence, Borg vs McEnroe is close to being as unmissable as that 1980 final was.