Stirring Bond pastiche that will leave you shaking with laughter 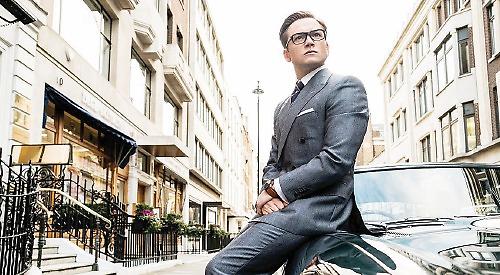 FOR those who prefer their Bond — or Bond pastiche — both distinctly shaken and stirred, they may look no further than director Matthew Vaughn’s latest British-financed Kingsman flick.

After a savage strike on the Savile Row tailor-fronted Kingsman intelligence agency, it elicits the support of its American counterpart “Statesman” — a bourbon distillery operating in similarly covert mode and headed up by Champ (Jeff Bridges), to help thwart the despicable plans of Poppy’s Golden Circle narcotics empire.

Eggsy’s mentor at the Kingsman agency, Harry (Colin Firth), is thankfully back in the mix — having been dispatched with a shot to the head at the close of the first instalment — due to a miracle life-restoring gel bag applied to his cranium.

Although suffering from amnesia, and sporting a patch on the targeted eye, he is coaxed back to intermittent neurological health and most of his former high-calibre spy antics.

A couple of minutes in and we are catapulted into Vaughn’s steroid-induced demented world — in the form of a meticulously choreographed black cab chase and onboard camera-whirling joust between Eggsy and robotic-armed opponent Charlie (Edward Holcroft).

This is welcome and of course well-charted territory — the schoolboy-sniggering language of its Kingsman predecessor, and the wonderful Kick-Ass.

From a cable car-serviced mountain lair casting a nod to On Her Majesty’s Secret Service, Moore’s charmingly irreverent Poppy in her Fifties refuge, a scene at the Glastonbury Festival which simply cannot be repeated here, a classic Deep South bar brawl, to Elton John’s delicious cameo as his flamboyantly-garbed kidnapped self, there is enough high-octane japery and fully-leaded action here to foil any safe-bet tentpole Hollywood fare.

A little more dexterity in the cutting room might have trimmed down the running time by 20 minutes or so to a more likeable two hours.

But if you mourn the passing of Bond’s political incorrectness, smuttiness, guilt immunity and cold-blooded violence, Kingsman: The Golden Circle delivers in spades — and you needn’t apologise for briefly or unexpectedly shuffling your loyalties away from the Sam Mendes-directed franchise.

This is offensive entertainment at its best, but oh so much fun.