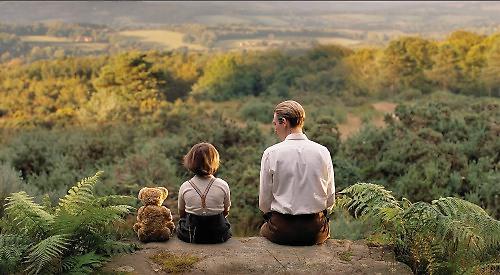 WHO was AA Milne? Posterity rightly remembers him as the author of the Winnie-the-Pooh books set in the Hundred Acre Wood.

But he was also a successful playwright who served in both world wars and as a journalist became the assistant editor of Punch.

In July 1916 he was injured in the Battle of the Somme and invalided back to England where, having recuperated, he was recruited by military intelligence to write propaganda articles.

Following the armistice of November 1918, Milne relinquished his commission, retaining the rank of lieutenant. In August 1920 his wife Daphne gave birth to their son, Christopher Robin.

The family were at this time still living in London — which is where Simon Curtis’s film joins them. But Milne, a survivor of the trenches and still suffering the ravages of shell shock, comes to prefer the quiet of rural Sussex, which he hopes will inspire him to write.

Keen to follow the example of Robert Graves by saying his own “goodbye to all that” he makes plans to write an anti-war book — one that would later be published in 1934 as Peace with Honour.

In the meantime, though, Milne comes to delight in his relationship with his young son, whose collection of stuffed animal offers a fresh source of inspiration.

Living at Cotchford Farm on the northern edge of Ashdown Forest, complete with its own Five Hundred Acre Wood, all the ingredients were in place for what were to become some of the world’s most enduring children’s stories.

Pooh himself was modelled on Christopher’s real-life teddy bear, Edward — but the name Winnie came from a Canadian black bear, aka Winnipeg, who lived in London Zoo.

The young Christopher Robin’s other toys — Piglet, Eeyore, Kanga, Roo and Tigger — were later to find their own place in the stories alongside the wholly fictional Rabbit and Owl.

But the film takes pains to emphasise the damaging effect it had on Milne’s family — in particular on his son, who is left bewildered by the attention it brings.

Portrayed here by Domhnall Gleeson and Margot Robbie, Milne’s marital difficulties with Daphne also lie at the heart of the story.

But Curtis saves the film’s biggest emotional punch for the final act, with Christopher Robin keen to enlist for the fight against Hitler.

For Milne, despite his impassioned anti-war efforts, it seems that everything has come full circle.