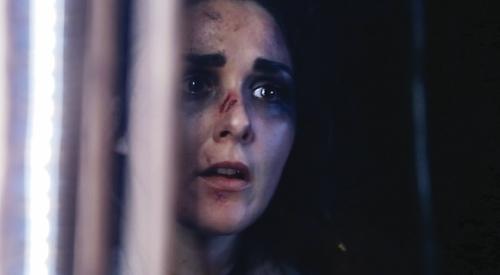 A POST-apocalyptic thriller from the award-winning Henley-based Trench Films has its debut screening at the town’s Regal cinema tomorrow (Saturday).

With a running time of 18 minutes, the film uses fantasy elements to explore environmental themes that appear all too current.

Turned black by the soot of mankind’s industrial waste, Mother Earth is seeking a devastating retribution.

After hundreds of years of pollution and desecration, a mythical demon has risen from the depths of the earth in retribution for the way humans have plundered and pillaged the planet’s natural resources. Nature, it seems, is fighting back.

Dido (Nadia Lamin), one of the last surviving humans, makes a final bid for escape to the New World.

There she hopes she will find her family again.

But first she must portal-jump out of one of the few remaining launch chambers.

However, when she arrives she encounters an old acquaintance, Luca (Charlie MacRae-Tod), who holds the chamber’s only travelling device but is in desperate need of an escape chord — just like the one Dido has around her neck.

Time is of the essence and only one can escape. Dido and Luca must decide who will stay and battle the demon alone...

Explaining how she came to work on the film, director Jo Southwell said: “Earlier this year one of my favourite actresses Nadia Lamin asked me if I would direct the Trench Films short Portalis.

“I was delighted to come on board and support this up and coming production company.

“They are screening the short this weekend before festival season. If you can come along, please do.”

Tomorrow’s screening starts at 11.15am and runs till noon, with the doors due to open at 11am at the cinema in Boroma Way.

A spokesman for Trench Films said: “Portalis was filmed in March and we will be doing the rounds with it on the short film circuit next year.

“Filming in the beautiful South Oxfordshire countryside we also had the honour of working with the artist and art director Dick Budden, who let us use his art studio Coltmans Farm for the majority of the film.

“We are very excited to share this experience with you, and hope you enjoy the film.”

Tickets for the screening are priced £5.90 and can be booked via Eventbrite.