Secrets and intrigues threaten to boil over 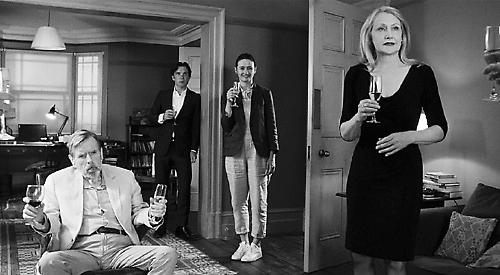 WHILE most people would have watched through their fingers, the makers of this week’s film The Party must have been close to rubbing their hands with glee at the spectacle of Theresa May’s speech to Tory conference.

Scheduling the film for release at the end of party conference season was always going to be clever timing, but with a cabinet reshuffle supposedly in the offing it really could not be bettered.

In the opening scenes we meet Janet, played by Kristin Scott Thomas, who has just been appointed to a key position in the shadow cabinet — the crowning achievement of her political career to date.

She and her husband Bill (Timothy Spall) plan to celebrate her promotion with a few close friends.

But as the guests arrive at the couple’s London home, the party takes an unexpected turn when Bill suddenly makes some explosive revelations that take everyone present by surprise.

If that scenario slightly calls to mind Mike Leigh’s superb 1996 outing Secrets and Lies, that’s surely no bad thing — but The Party is just as much a film in which to expect the unexpected.

That’s certainly what Janet seems to be thinking when she throws open the front door, shakily wielding a most unladylike accessory — a gun.

How can have things come to such a pass in such a genteel middle class suburb, one wonders. An argument about hard or soft Brexit? A fall in house prices? A deflated soufflé?

The film promptly rewinds to reveal — in real time — the secrets and intrigues that threaten to boil over into murder.

Like the aforementioned Mike Leigh adapting an Agatha Christie novel, Potter assembles her suspects in the drawing room, none of them exactly who they seem.

What follows is a hilarious comedy of tragic proportions in which love, friendships and political convictions are soon called into question. Potter’s decision to shoot the film in chilly black and white clearly belies the amount of fun she intends to have with us.

Although it dances around such potentially heavy issues as feminism and “caring” capitalism, this isn’t a political exercise.

The Party is a smart, fast-paced film full of razor-sharp one-liners that perfectly suits these turbulent times.

Although a relatively short feature film at 71 minutes, there are plenty of talking points — which is why Henley’s Regal Picturehouse cinema has chosen it as the subject of its latest monthly film discussion hosted by duty manager Wolf O’Neill.

This will take place at around 8.15pm on Monday following on from the 6.30pm screening. Held in the café, the discussion is free to all to attend and complimentary tea and coffee will be served.