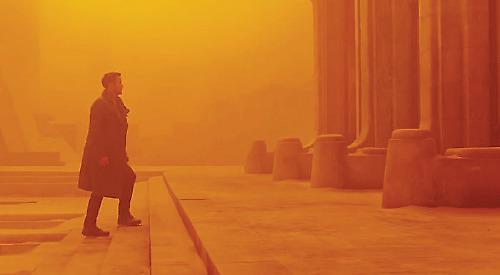 IT is 35 years since Ridley Scott’s slow-burn Blade Runner transported the sci-fi genre into untried and untested terrain.

Those who waited for a follow-up to Harrison Ford’s exploits as a replicant-hunting cop will be amply rewarded by Denis Villeneuve’s deft treatment of this sequel set in 2049 — as the title suggests — and picking up the narrative 30 years on from Scott’s former vision of a dystopian Los Angeles.

Officer K (Ryan Gosling) of the LAPD, himself a replicant, must “retire” (that is, dispose of) rogue earlier models produced by the Tyrell Corporation.

After confronting one such human-like android, Sapper Morton (Dave Bautista), K locates a buried casket with the remains of a replicant who appears to have received a caesarean section, suggesting that the Tyrell versions were capable of reproducing.

As with the 1982 original, 2049 plods at a tortoise-crawling pace and its
163-minute running time is an intimidating prospect if you didn’t think you had something better to do.

But even through what seem at first like leaden plot meanderings and frustrating watch-glancing silences, as the drama unfolds, you increasingly can’t shirk the sheer scale, beauty and high-concept intrigue of what’s on offer here.

On the music front, Hans Zimmer and Benjamin Wallfisch rework Vangelis’s original score into an alien soundscape of factory horns and discernible dread.

Blade Runner 2049 is worth seeing for a career best by Harrison Ford alone.

But most importantly, you’ll find this film raises lofty questions of today about our hedonistic pursuit of technology, the role of a corporate elite, what happens when our cities just can’t cope any more, and even muses on our own mortality.

This could be a must-see.