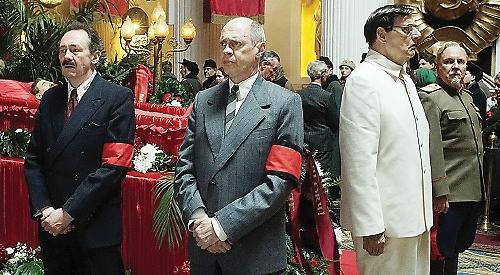 THE internal political landscape of Fifties Soviet Russia takes on a darkly comic form in a new film by writer-director Armando Iannucci, the creator of hit comedies The Thick of It, In the Loop and Veep.

In the days following Joseph Stalin’s collapse, the machinations of senior party officials and courtiers kick into overdrive.

Some want positive change in the Soviet Union while others undoubtedly have more sinister motives.

But behind all the collusion, backstabbing and strong-arming, the jostling ministers have one thing in common — they’re just desperate to stay alive.

Starring some of Britain and America’s finest and funniest character actors, the opening scenes depict Stalin, played by a convincingly made-up Adrian McLoughlin, as a potty-mouthed leader well aware of his hold over both a vast, impoverished empire and a crew of fawning courtiers jockeying for his favour.

But after the dictator suffers a stroke and then a fatal heart attack in 1953, the machinations of these senior party officials kick into overdrive as they bicker over the political ramifications of his death — and in particular the line of succession.

Another standout is the torture-loving interior minister, Lavrentiy Beria (Simon Russell Beale), whose lewd cunning outstrips and outfoxes them all — quite an achievement when he has to deal with Stalin’s grown-up but seriously deranged children, Svetlana (Andrea Riseborough) and Vasily (Rupert Friend), both of whom think they know what’s best for them and, by half-hearted implication, their country.

Svetlana’s demand that Moscow’s best doctors be immediately drafted to try and revive her father are met with Beria’s rueful observation that, on Stalin’s earlier orders, they’ve all been eliminated.

Based on the graphic novel by Fabien Nury, Iannucci’s script — with contributions from regular collaborators Ian Martin and David Schneider — is brimful of acerbic, politically incorrect dialogue, with subtexts that are obviously yet shockingly relevant to the present day.

Iannucci’s trademark flair for fashioning hilarious secondary almost incidental, dialogue to build up serious belly laughs is deployed as riotously as ever.

An additional joy is watching this ensemble cast, which includes Paddy Considine and Justin Edwards, clearly enjoy themselves to the hilt.

The Death of Stalin is now showing at the Henley Regal Picturehouse.