All 'Mod' cons at pub with cinema licence... 'Quadrophenia' star is coming to Queen Victoria screening 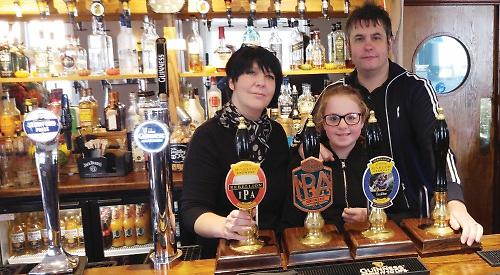 THE new landlords of a Henley town centre pub are pulling out all the stops to entertain their
customers — starting with a screening of the classic Mod drama Quadrophenia tomorrow night (Saturday).

Jamie and Marnie Liston took over the running of the Queen Victoria in Market Place in August.

The couple, from Bracknell, previously worked in project management and local government respectively. The Queen Victoria is their first pub.

“It’s been a bit of a baptism of fire,” admits Marnie, 47. “Just coming in, being new to Henley and trying to work out how it works and so on. But so far so good.”

Nearly three months after taking over from previous landlords Nick and Lesley Cobb, who had run the pub for four years, the Listons are settling in nicely.

Their first move was to establish a rolling programme of entertainment.

With hot food not having previously been available at the Queen Victoria, work to fit out the kitchen is ongoing. Once this is in place, the pub will have gourmet hot dogs and burgers on the menu courtesy of Banger Bros.

Another key part of the Queen Victoria’s offering is its ability to show up to four different types of sport at once. “What’s unique to us is that we’ve got four screens,” says Marnie. “We’re fully signed up to Sky and BT, so we can show any match going on at any one time.

Measuring 120 inches plus, the pub’s fourth screen — together with its accompanying projector — is the latest to be installed.

“We’ve got a film licence,” explains Marnie. “Going forwards we’re going to do some real cult films — some Eighties stuff like Top Gun. Get some dressing up going on. You know, films that everybody would like.”

Tomorrow night it is the big screen that will be the focal point when the pub hosts a special showing of Quadrophenia.

Directed by Franc Roddam and released in 1979, the Sixties-set Mods and Rockers drama was loosely based on the 1973 album of the same name by The Who, which documents the clashes between the two subcultures in London and Brighton.

Now 57, the actor Gary Shail played Spider in the film — one of the close friends of the lead character Jimmy Cooper (played by Phil Daniels).

To accompany the screening, he will be making a personal appearance at the pub.

The evening starts at 7pm with an hour-long Q&A with the actor, followed by the screening at 8pm — after which there will be a chance for fans to request selfies and autographs.

Admission is free and after the screening the fun will continue with music from the film and the Mod era being played.