Branagh doubles up for Christie's classic 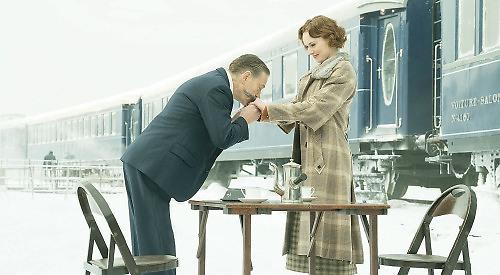 ONE of the best known and best loved of all Agatha Christie’s mysteries, Murder on the Orient Express offered readers the enticing prospect of the world’s greatest detective — the elaborately moustachioed Hercule Poirot — aboard the world’s most famous train.

David Suchet, of course, will always be the actor most closely associated with the Belgian sleuth.

But as a filmmaker who has never shied away from the challenge of breathing new life into time-honoured classics, Kenneth Branagh here seeks to make the character his own in front of the camera while at the same time handling directorial duties behind it.

“Agatha Christie describes it in the books as immense and so that’s what we decided to do,” says Branagh. “The moustache is protection and it’s a provocation. He can hide behind it but also when people ridicule it, sneer at it or dismiss him, they underestimate him — and therefore his job as a detective becomes simpler.”

Retaining the novel’s setting of Thirties Europe, Murder on the Orient Express pulls into cinemas with a lavish setting, a stellar cast and a few newly added twists and turns to keep the audience guessing.

Aboard the luxurious locomotive, 13 strangers quickly become suspects when they are snowbound and a fellow passenger is found murdered.

Poirot finds himself against the clock, battling to crack a seemingly unsolvable case before the killer strikes again.

Despite or perhaps because of its huge success, Branagh chose not to revisit Sidney Lumet’s 1974 film, which was nominated for six Oscars (with Ingrid Bergman going on to win best supporting actress).

“I did not look at it and that was a conscious decision,” says Branagh. “Our goal was to try and find a new approach. That’s why I think classic stories are worth retelling.

“We’ve had a chance, with the blessing of the Agatha Christie company, to be inventive and a bit imaginative with the story.

“I think there are some surprises. It does ask quite a stark question about whether revenge or an eye for an eye is finally a good or satisfying way to avenge even the most terrible of crimes.”

Murder on the Orient Express is showing from today (Friday) at Henley’s Regal Picturehouse cinema.