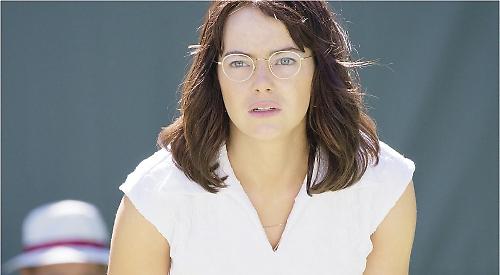 WHAT is it with tennis movies at the moment? They are like buses. You wait for ages — the last one that comes to mind is 2004’s amiable romcom Wimbledon starring Paul Bettany — then three come along at once.

First there was was Borg vs McEnroe, which hit cinema screens back in September, with so-so results.

Now there is Battle of the Sexes — the story of the legendary 1973 tennis match between Billie Jean King and the former world number one men’s player Bobby Riggs.

Before we get on to that, there is another tennis film coming down the pike — a documentary called Love Means Zero about the infamous and influential coach Nick Bollettieri.

Hopefully, Picturehouse Cinemas will pick it up and we will have a few screenings at the Henley Regal. For now, though, it’s worth noting that the real-life “Battle of the Sexes” was big box office — drawing an estimated worldwide TV audience of 90 million.

Something for the team behind Battle of the Sexes to live up to — though husband and wife directors Jonathan Dayton and Valerie Faris are no strangers to success, having previously scored a quirky crossover hit with the 2006 comedy-drama Little Miss Sunshine.

Fresh from her winning the best actress Oscar for La La Land, having Emma Stone in one of the lead roles isn’t a bad place to start. She plays Billie Jean King, the world’s number one women’s tennis player, who agrees to take on Bobby Riggs in a pioneering “Battle of the Sexes” match.

In the wake of the sexual revolution and the rise of the woman’s movement, King’s aim is to prove that women deserve the same pay and recognition as male tennis players, so there’s plenty at stake on all fronts.

As the rivalry between King and Riggs intensified, off court each was fighting their own demons.

The fiercely private King was not only championing equality but also struggling to come to terms with her own sexuality. For his part Riggs, who had won Wimbledon in 1939 as a 21-year-old amateur, was wrestling with a ferocious gambling addiction.

Asked what had drawn her to the project, co-director Valerie Faris said: “It’s both the story of an historic sporting event and of a woman’s private, personal transformation while under intense public exposure. We were interested in how she was fighting both personal and political battles at the same time.”

Battle of the Sexes is now showing at Henley’s Regal Picturehouse cinema.