How we look is still a difficult issue to face 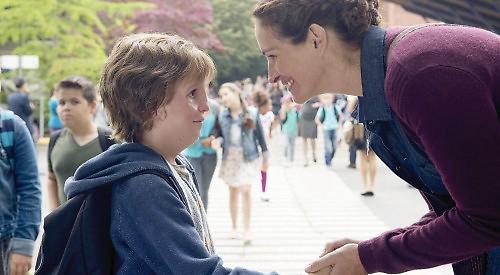 MOVIES that tackle difficult issues are one thing. Those that actually succeed in doing so are quite another.

Three decades on from the success of Mask, which saw Eric Stoltz nominated for a Golden Globe and Cher win the best actress award at Cannes, a new film is bravely charting the same territory.

Based on RJ Palacio’s acclaimed children’s novel of the same name, Wonder tells the story of August “Auggie” Pullman, a young boy born with a facial deformity who tries to fit in at a new school.

Auggie simply wants to be an ordinary 10-year-old. He does ordinary things — like eating ice cream and playing on his Xbox. He feels ordinary — inside. But ordinary kids don’t make other ordinary kids run away screaming in playgrounds. Ordinary kids aren’t stared at wherever they go.

Born with Treacher Collins syndrome, Auggie has been home-schooled by his parents his whole life. Now for the first he’s being sent to a real school — and he’s dreading it.

All he wants is to be accepted — but can he convince his new classmates that he’s just like them underneath it all?

Wonder is directed by Stephen Chbosky, who made his name as the author of the bestselling coming-of-age novel The Perks of Being a Wallflower, which he later turned into a hit film.

Philosophical about the stares and bullying meted out by his peers, Tremblay’s Auggie is determined to persuade his taunting schoolmates that the old adage “beauty is only skin deep” remains true.

At home, his fiercely supportive parents — Julia Roberts and Owen Wilson in standout performances — do their utmost to ease his difficult passage through fifth grade and beyond.

Well versed in the subtleties of youth-based emotional drama, director Chbosky does a fine job of empathising with Auggie’s dilemma — but ultimately this is Tremblay’s film.