Photo could only tell a fraction of the story 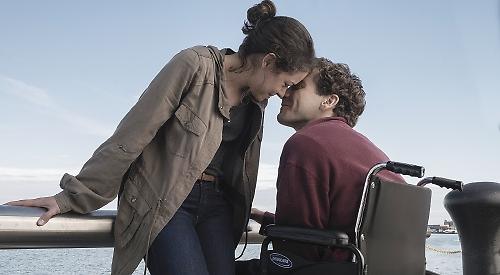 ON April 15, 2013, two homemade bombs detonated 12 seconds and 200 yards apart near the finish line of the annual Boston Marathon.

Three people were killed outright and several hundred others injured — including 16 who lost limbs.

Jeff Bauman, 28, had been waiting at the finish line for his girlfriend Erin Hurley and her two roommates, who were competing in the event when the bombs went off.

He survived but lost both of his legs — unwittingly becoming a symbol of courage and heroism after an Associated Press photograph of him being rushed to an ambulance in a wheelchair went viral.

On waking up in hospital, he was instrumental in helping the FBI identify one of the terrorist brothers behind the attack. Celebrated by the media and thrust into the public eye, Bauman quickly became a symbol of hope for a nation in need of a hero. But it was a status he didn’t feel he deserved.

With his girlfriend by his side, he began the long process of rehabilitation — eventually deciding to write the memoir that became the basis of this film. Stronger stars the ever versatile Jake Gyllenhaal, who offers a titanic turn as Bauman, with Tatiana Maslany — hitherto best known for her roles in the hit Canadian science fiction TV series Orphan Black — as Erin.

She shines in the tough role of a woman who must bear the guilt that her partner showed up to support her at just the wrong moment.

It’s a harrowing and emotional ride as the couple are forced to come to terms with the life-changing nature of Bauman’s injuries.

Fortunately, the man who was later nicknamed “Boston Strong” has a cast-iron network of friends and family around him, including his mother Patty (Miranda Richardson) and father Jeff Sr (Clancy Brown).

Smartly directed and wonderfully acted, Stronger is a sensitive retelling of Bauman’s physical and emotional journey that also asks the question: what really makes a hero?

Another film coming to Henley’s Regal Picturehouse that asks a similar question in a different way is Star Wars: The Last Jedi — tickets for which are already on sale up to New Year’s Eve.

The first screening of the sequel to 2015’s The Force Awakens takes place at one minute past midnight on Wednesday (at 00.01am on Thursday to be precise).

A spokesman for the cinema in Boroma Way said: “We are encouraging people to dress up for this one — including staff!”

For more information, visit www.picturehouses.com and select your cinema.