Sequel has 'built in' a tribute to original star 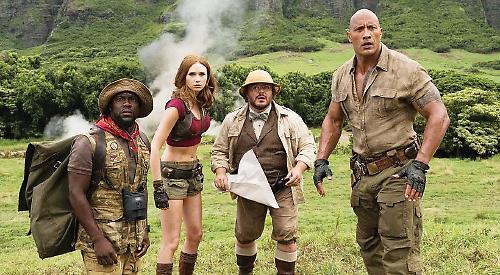 CHRISTMAS is undoubtedly the biggest time of the year for board games, but in some quarters they’re seen as being a bit “last century”.

Such is the case with the long-awaited sequel to Jumanji — the 1995 smash hit starring the late and much-loved Robin Williams at the peak of his powers.

Even by Blade Runner standards, 22 years is quite a long time to wait for a
follow-up, but in the case of Jumanji — where characters can spend decades trapped in the alternate world of the game — it somehow makes perfect sense.

So, moving with the times, instead of the board game of the previous film, four badly behaved high school kids find a retro video game among some old junk they are clearing out while on detention. As they start to play, the teenagers are transformed into the avatars they themselves have just created and are whisked into the dense jungle on screen — with completing the game their only means of escape.

Dwayne Johnson, aka The Rock, leads the star-studded cast as gaming nerd Spencer in the character of Dr Smolder Bravestone, who accepts the challenge of decoding the game.

Karen Gillan, best known for her roles in Doctor Who and Marvel’s Guardians of the Galaxy, plays dance fighter Ruby Roundhouse — the avatar of shy high school bookworm Martha.

Then there is Jack Black as the multi-talented Professor Sheldon “Shelly” Oberon, an adventurer who makes Indiana Jones look frankly underqualified. He is the avatar of Bethany, the prettiest girl in the school.

Asked about the course the film takes, Black recently told an interviewer: “We’re exploring the jungle and trying to conquer the game — it’s life or death. But while we’re there, we find clues left behind by [Robin Williams’s character] Alan Parrish. He built a full-blown jungle house, similar to a Swiss Family Robinson situation. It’s like he’s there helping us without actually being there.

“In the original film you never got to see inside the world, but this one takes place primarily inside the jungle of Jumanji. That’s the coolest part of the film — that we’re able to transport the audience to that secret wondrous land, with the danger and the beauty.”