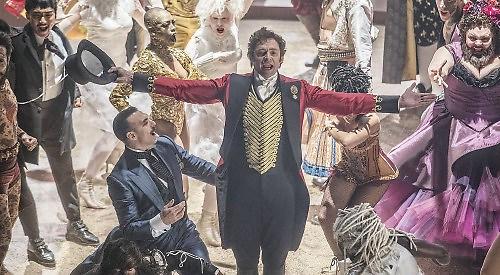 Broadway veteran Hugh Jackman returns to his song-and-dance roots in a dazzling feelgood musical about taking risks and chasing your dreams.

Inspired by the life of showbusiness pioneer PT Barnum, The Greatest Showman charts one man’s rise from nothing to create a circus spectacle that would become a worldwide sensation — literally “The Greatest Show On Earth”.

Jackman stars as the down-on-his-luck Barnum, who gathers a motley troupe of extraordinary performers and changes the face of entertainment for ever.

Strutting their stuff alongside him in this rags-to-riches tale are the likes of Michelle Williams, Zac Efron and singer Zendaya, performing catchy original music penned by La La Land songwriting duo Benj Pasek and Justin Paul (who were hired to work on the project back in 2013, so there’s no need to worry about bandwagon-jumping).

“It’s a fantastical rags-to-riches tale that celebrates creativity and what is unique about each and every one of us,” says Jackman, who spent years developing and nurturing the film.

“Up until La La Land everyone was saying there hasn’t been an original musical in 23 years. So the prevailing thought in Hollywood was, unless you have a brand people know, it’s not a done thing. So it just took a long time.”

Casting-wise, the movie is a feast of some of the hottest talent around. As well as song-and-dance man Jackman (last seen baring his claws in Logan, but also a Broadway veteran and Academy Award nominee for his live singing in Les Misérables), the film has Zac Efron (who started out dancing around the halls in the High School Musical movies) as Barnum’s business partner, who falls in love with a trapeze artist played by recording star Zendaya.

Although it might be set in the mid-1800s, Jackman and director Michael Gracey were determined that the film and the music would have a distinctly contemporary feel.

“We were clear from the beginning that this wouldn’t feel like a period movie or a historical piece,” Jackman adds. “What would Barnum do now? I have an almost-12-year-old daughter. I wanted this to be as exciting for her as listening to Katy Perry’s new song.”