Spielberg makes the case for a free press 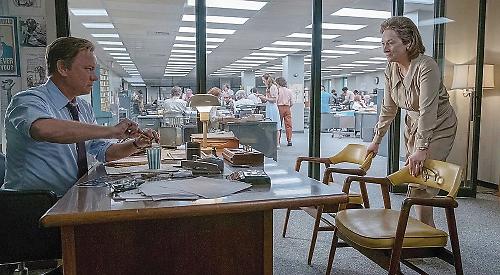 WHAT’S the best film of the last 10 years? As a journalist I admit to being biased, but my candidate would probably have to be 2015’s Spotlight.

Josh Singer, who co-wrote the screenplay with director Tom McCarthy, told an interviewer that one of his goals for the film was to highlight the power of journalism, which he felt had been waning, and the importance of a free press.

He said: “This story isn’t about exposing the Catholic Church. We were not on some mission to rattle people’s faith. In fact, Tom came from a Catholic family. The motive was to tell the story accurately while showing the power of the newsroom — something that’s largely disappeared today. This story is important. Journalism is important, and there is a deeper message in the story.”

Amen to that. Much the same could of course be said of All the President’s Men — Alan J Pakula’s acclaimed 1976 dramatisation of the Washington Post’s Watergate investigation.

Based on the book by reporters Bob Woodward and Carl Bernstein, the film understandably focuses on the pair’s relentless shoe leather pursuit of a scandal that was ultimately to bring down President Nixon.

But some have noted that one character who played a significant role in the paper’s coverage of Watergate features only tangentially in the film — Washington Post publisher Katharine Graham.

While she does get a couple of mentions, she never appears on screen.

Yet only a year before the Watergate burglary of June 1972, Graham had been in the trenches with Bradlee and his staff as they set about securing the publication of the leaked Pentagon Papers detailing the full extent of US political and military involvement in Vietnam — a crusade that risked both the editor’s survival and that of the Washington Post itself.

Bradlee later wrote: “We had been supported by the publisher every step of the way, and she had withstood enormous pressures to stand by our side. Pressures from her friends as well as her enemies.”

It’s a story that demands to be told — and Steven Spielberg has decided that he’s the man to do it.

With a screenplay by Josh Singer (him again), The Post stars Meryl Streep as Graham and Tom Hanks as Bradlee, while the set design and cinematography transport us back into the Washington Post offices so familiar from All the President’s Men.

The Post is showing from today (Friday) at Henley’s Regal Picturehouse cinema.