Devil's in the detail for Damon and Co 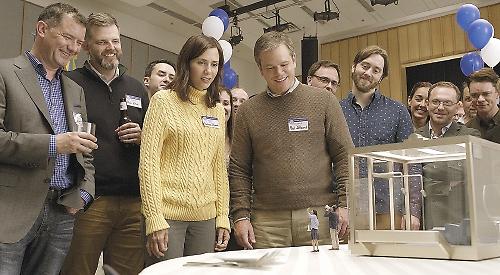 JUST when the world’s problems seem to be growing bigger, along comes a comedy about getting smaller — but the humour in director Alexander Payne’s latest feature is by no means escapist.

Presenting a plausible near future, in which the climate change nightmares predicted by Al Gore are becoming real, Downsizing sees a Norwegian scientist hitting on a salve if not a solution — by reducing people to a mere five inches in height, the human race can stretch out what’s left of the earth’s resources and reduce its carbon footprint.

Matt Damon stars as Paul Safranek, a blue-collar worker with big dreams but a modest income. Knocked back in the real world, where their attempts to move up the property ladder are always being thwarted, Safranek persuades his wife Audrey (Kristen Wiig) to visit Leisure Land Estates, a tiny city where miniaturised people can see their savings balloon in value. Everything — from houses to diamonds, cigars and perfume — costs a fraction of its real-world going rate, and so the couple decide to take the plunge.

This is where Downsizing settles into its groove, as very quickly the novelty of the premise itself begins to shrink into inconsequence.

Even in a proportionally smaller world, the same big issues remain, and Safranek soon finds himself back at the mid-life crisis crossroads.

Luckily, his new friends are there for him — his upstairs neighbour Dusan (Christoph Waltz), an effervescent playboy/black marketeer from Serbia, and his seafaring sidekick Konrad (a rare non-sinister role for Udo Kier).

Then just when things seem to be quietening down, Payne switches things up again with the introduction of the film’s surprise third lead — a
one-legged Vietnamese activist, played with ridiculously endearing comic gusto by Big Little Lies’ Hong Chau.

As with Payne’s 2004 five-Oscar-nominated smash hit Sideways, Downsizing isn’t so much about the destination as the journey.

Damon plays it so endearingly straight that the film’s reminders of Safranek’s new size — like Konrad’s deadpan revelation that he travels the world by FedEx — are laugh-out-loud pearls.

At its heart, this is a film about the pursuit of happiness, following the exploits of a man so distracted by society’s ideas and ideals — getting married, settling down, saving the environment — that he’s lost sight of his own needs.

These may be hard times, Payne’s film is saying, but big decisions need to be made out of love rather than fear.