Day-Lewis's final cut is the deepest 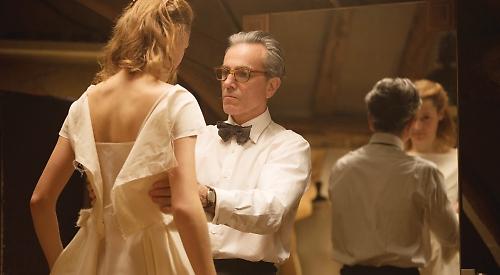 WHAT defines the greatest artists? Single-mindedness, sheer inspiration, or something more?

Phantom Thread is the eighth feature film from writer-director Paul Thomas Anderson, who made his name 20 years ago with Boogie Nights.

At the time of writing, Anderson is the only person to win all three director prizes from the three major international film festivals: Cannes, Berlin and Venice.

Matching that number, with three best actor Oscars to his name — for My Left Foot (1989), Anderson’s 2007 outing There Will Be Blood, and Lincoln (2012) — Phantom Thread stars Daniel Day-Lewis in what the actor has said will be his final film appearance.

Day-Lewis famously gives everything to his roles. Back in 2016, the whispers about Phantom Thread included the claim that the actor was training to be a real-life tailor in preparation for his portrayal of the obsessive and driven couturier Reynolds Woodcock.

While Anderson’s film may not be “based on a true story” that isn’t to say his lead character doesn’t have his real-life equivalents.

The word is that Phantom Thread is loosely based on the life of either the British-born fashion designer Charles James, who was known as “America’s First Couturier”, or his Basque counterpart Cristóbal Balenciaga.

Balenciaga had a reputation as a man of uncompromising standards, with Christian Dior hailing him as “the master of us all”. For her part, Coco Chanel called him “the only couturier in the truest sense of the word”, adding: “The others are simply fashion designers.”

The Spaniard, who moved his business to Paris in 1937, had a similarly high regard for James, saying of him that he was “the only dressmaker who has raised [fashion] from an applied art to a pure art form”.

You could say much the same about Day-Lewis and Anderson — who has here made his first film outside the United States. A tale of obsession and self-doubt, Phantom Thread takes us into the London fashion world of the Fifties, at the centre of which we find Woodcock and his sister Cyril (Lesley Manville) dressing royalty, film stars, heiresses and débutantes in their distinctive style.

But despite the women in his life, Woodcock remains a confirmed bachelor, seeking only companionship and inspiration for his work, and all under the protective eye of Cyril.

That’s until he meets hotel waitress Alma (Vicky Krieps) who, young and determined, starts to turn his carefully tailored life upside down.