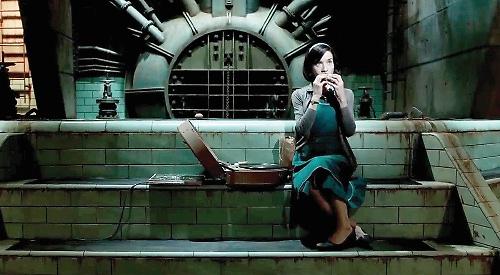 IT’S been nominated for an incredible 13 Oscars, which some might think an unlucky number, but with its cinema release due on Wednesday — ie Valentine’s Day — The Shape of Water is clearly a film with its heart in the right place.

Director Guillermo del Toro always brings a distinctive vision to his films, but hitherto it’s been Spanish-language titles such as 2006’s Pan’s Labyrinth that have most burnished the Mexican’s reputation.

Twelve years on, del Toro has delivered the film he was seemingly born to make — a genre-fusing love story of extraordinary originality that is by turns ravishingly beautiful, grippingly tense and heartbreakingly romantic.

Set in 1962, in Cold War America, it stars Sally Hawkins as Elisa Esposito, a cleaner in a Baltimore high-security government laboratory.

At work she bonds with her colleague Zelda (Octavia Spencer), and at home she drops in on her neighbour, commercial artist Giles (Richard Jenkins).

Elisa doesn’t have big expectations for her own life, and perhaps that’s related to insecurity over her speech disability — she’s mute.

Elisa’s life changes forever when the laboratory becomes host to a highly classified asset — a human-like amphibian (Doug Jones), who is imprisoned in a water tank.

The captured creature is in the charge of a ruthless government agent, Richard Strickland (Michael Shannon), whose methods are at odds with those of marine biologist Robert Hoffstetler (Michael Stuhlbarg), who admires the amphibian and who is harbouring his own secrets.

Elisa finds herself caught up in the middle of a Cold War conflict when she forms an intimate bond with the man in the glass tank — but how far will she go for a chance at love? The Shape of Water was greeted with instant acclaim when it premiered in August at the Venice Film Festival, winning top prize of the Golden Lion.

Del Toro, who was nominated for an Oscar for writing Pan’s Labyrinth, now looks set for a personal breakthrough at March’s Academy Awards.

He calls water “the most powerful and malleable force in the universe”, adding: “That’s also love, isn’t it?”

Hawkins, who was cast in her first lead role in Mike Leigh’s Happy-Go-Lucky 10 years ago before being Oscar-nominated for her supporting work in 2013’s Blue Jasmine, is now a hot prospect to win major honours. Wish her well this Valentine’s Day.