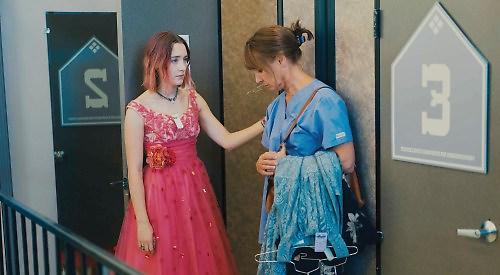 The solo directing debut of actor Greta Gerwig (Francis Ha, 20th Century Women), it takes a well-worn staple — the coming-of-age story — and makes it shiny and new, with warmth, wit, generosity of spirit and a fresh eye for detail.

This funny, crowd-pleasing, beautifully drawn portrait of young girlhood recently became one of the best-reviewed films in the history of Rotten Tomatoes. And it’s not difficult to see why.

The story is set in Gerwig’s hometown of Sacramento, California, in 2002, but finds a universality in its specifics that resonated with Saoirse Ronan. As Gerwig recalls: “The first time we talked, Saoirse said, ‘I’m from Ireland, but this is my story. I understand it at a gut level, I know what this is.’ It was such an immediate emotional response to it. Then she did all this incredible work and transformed herself into this American teenager so seamlessly.” Ronan is captivating as Christine McPherson, a red-haired, acne-ridden teen who calls herself Lady Bird. She wants to rebel against her humdrum home life and Catholic school by going to college in New York — she believes it is easier to get in after 9/11 — but doesn’t quite have the work ethic to get the grades.

Without forcing a plot on proceedings, Gerwig beautifully etches the desire to leave home, the ups and downs of friendships, and first experiences with boys (played by Manchester by the Sea’s Lucas Hedges and Call Me By Your Name’s Timothée Chalamet).

Ronan perfectly delivers droll one-liners, while spinning rebelliousness and vulnerability on a dime. She also channels some of Gerwig’s sensibility as an actor — but don’t mistake the character for the director. “I was quite different from Lady Bird,” says Gerwig. “I was a much more rule-following kid. I never had red hair. I never made anyone call me by a different name. I never talked back in the way that she does. There are a couple of things that are true, but it never is how it was because it’s not documentary, it’s fiction.”

In a rarity for a teen film, Lady Bird gives as much care and attention to its grown-ups as it does its adolescents.

Tracy Letts is a warm, encouraging presence as her father, and Lois Smith is a hilarious as a straight-talking nun, but it is Laurie Metcalf who steals the film, superb as Lady Bird’s tough, no-nonsense mother, but hinting at a reservoir of unsaid affection underneath. Gerwig likes her characters, foibles and all, and warmly embraces them. You will, too.