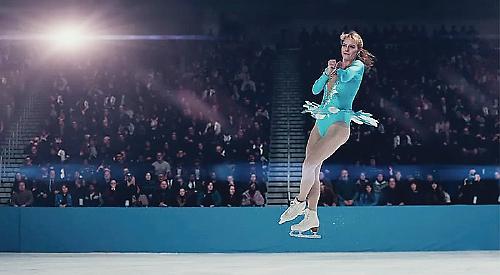 IF you know only one shock horror scandal about ice skating, it will be the one about Tonya Harding and Nancy Kerrigan.

To recap: it is 1994 and Tonya Harding is aged 23 and dead set on making the US figure-skating team for the Winter Olympics in Lillehammer.

Her main rival is Nancy Kerrigan. Harding’s then-husband, Jeff Gillooly, set in motion a plan that led to a kneecapping assault on Kerrigan, effectively hobbling her off the ice.

Proof that truth is way more bizarre than fiction, this off-piste biopic plays out as an outrageously fun mockumentary.

It is, the opening text tells us, “based on irony free, totally contradictory and wildly inaccurate interviews” that writer Steven Rogers conducted with Harding and her former husband.

“The incident”, as the participants constantly refer to the knee-whacking, comes at the climax, yet it is not the film’s real focus.

The heart of I, Tonya is Harding herself — and Margot Robbie’s irresistible embodiment of her.

Born poor in Portland, Oregon, and proud to call herself a redneck, Harding never fitted the approved, cookie-cutter mould of some demure ballerina princess on ice.

She swore, she smoked, she threatened the judges, she had frizzy hair, she insisted on choreographing her routines to death metal, rather than classical music, and refused to dress, as she put it, “like a demented tooth fairy”.

She was also the first American female to achieve the notorious triple axel jump, yet repeatedly failed to rack up the scores her talent deserved at contests, because snooty skating judges considered her “unwholesome”. At least, that’s what we’re told here.

Harding makes for a wildly unreliable narrator, yet it’s impossible not to adore her, despite her whining, not least as we watch her clashing with her mother — a fabulously evil and awards-worthy turn by Allison Janney — and deadbeat husband (Sebastian Stan).

Robbie trained for months to master skating convincingly, and the editing between her and the stunt doubles is remarkably seamless.

However, it takes more than rink time to inhabit a character as miraculously as she does here.

The Australian actress has certainly picked some impressively challenging parts since her Wolf of Wall Street breakthrough in 2013, but disgraced figure-skating star Tonya Harding is truly the role of a lifetime and has already earned Robbie Golden Globe and Screen Actors Guild nominations.

I, Tonya is showing from today (Friday) at Henley’s Regal Picturehouse cinema.