Winslet's ready for another go-round 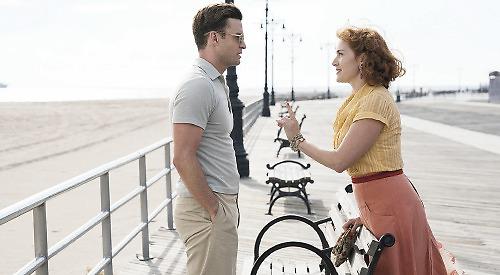 WRITTEN and directed by Woody Allen, Wonder Wheel tells the story of four characters whose lives intertwine amid the bustle of the Coney Island amusement park — with its famed Wonder Wheel — in the Fifties.

Temple, who displayed such underlying complexity in films like Killer Joe and Away, is intriguing as the knowingly sexy but fearful fugitive, and Timberlake (Inside Llewyn Davis) exudes matinée-idol charm flawed by dark self-interest as Ginny’s increasingly
put-upon lover.

However, the standout performers here are Winslet and Belushi — the former affirming the considerable, chameleon-like versatility evidenced in her recent roles in Insurgent, The Dressmaker and Steve Jobs. She gives a riveting performance of often subtly realised extremes.

As Allen himself said: “I try and cast actresses who have enormous range and depth and intensity. There is only a limited number of actresses in the English language that are that deep and that great. Kate Winslet is one of them.”

Reading-born Winslet, 42, said of her role in the film: “I play the lead. My character is called Ginny and she’s a waitress in a clam house. It was probably like the second most stressful part I’ve ever played, but the experience itself was just utterly incredible.”

She added: “The film revolves around Ginny, the promiscuous wife of a carousel operator, who perks up when she falls for a handsome lifeguard. But when her husband’s estranged daughter resurfaces and also sets her sights on Mickey, it begins the great unravelling of Ginny.”

Belushi, although consistently delivering great work in lesser roles, has remained somewhat in the shadow of his late brother, John, but in Wonder Wheel he paints a compelling picture of a conflicted but protective father and husband ultimately undone by male bravado.

Beautifully photographed by Vittorio Storaro, this is a powerful tale of passion, violence and betrayal, and has been hailed as one of Allen’s greatest delights of recent years.