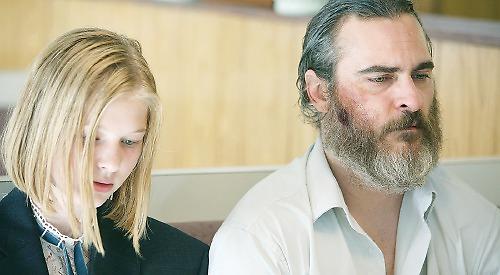 MUCH like its acclaimed director, Glasgow’s Lynne Ramsay, You Were Never Really Here is a film that defies convention.

Its most immediate impact is as a careful, lean, taut thriller, of the kind that Hollywood made so effortlessly in the post-war years, steadily dripping information as the antihero stumbles into a conspiracy beyond his comprehension.

However, where the classic noirs explored shades of grey, Ramsay’s film is a full-colour delirium, pausing at moments in its whiplash running time to dwell briefly on the beauty of the most unlikely things: a green Jelly Belly; a deserted airport gate; a child’s wet hair; an office full of cut flowers.

At its heart, much like Jonathan Ames’s source novel, the film is a character study, telling the story of Joe — a career-best turn from Joaquin Phoenix as a low-key but focused hitman operating from suburban New York.

Although he has gone to seed somewhat, and is probably past his physical prime, Joe is nevertheless an efficient worker. He leads a ghost-like existence, much of it spent caring for his elderly mother, but he specialises in finding missing children. His latest case takes up the film’s breathtaking opening scenes, a dazzling, edgy mosaic that plays out with the same kind of suspenseful intensity as the beginning of Nicolas Winding Refn’s Drive.

Once the job is done, Joe returns to normal life, but it is clear something isn’t quite right. Although he will finish a job by any means necessary, Joe is a man driven by duty and conscience, haunted by memories of an abusive, unseen father and flashes from a life of service, either with the military or the FBI.

Joe leans towards self-destructiveness, which is perhaps why he finds so much satisfaction in the protection of innocence. He gets another chance of salvation when an ambitious politician comes calling, asking Joe to find his runaway teenage daughter, Nina (Ekaterina Samsonov), but this time things don’t pan out the way they usually do.

Actually, nothing in this film is predictable, starting with Phoenix’s soulful, masculine, but never macho performance — a meditative study of torment that won him the best actor award at Cannes.

Then there’s Jonny Greenwood’s restless but controlled score, which seems to grow and evolve at its own pace, always ahead, like the mystery unfolding.

The most extraordinary aspect, however, is Ramsay’s handling of this gritty detective story. Using bare-bones exposition, guided largely by the principle of show but don’t tell, Ramsay gets as close as any director has come to the staccato storytelling of the best hardboiled pulp fiction — from Jim Thompson to James Ellroy.

At the same time, there’s a humanity here, a surprising, surreal lightness — even sweetness — that takes over, like Joe’s survival instincts, whenever the darkness threatens to close in.

You Were Never Really Here is now on general release.