Visionary director is taking the lead 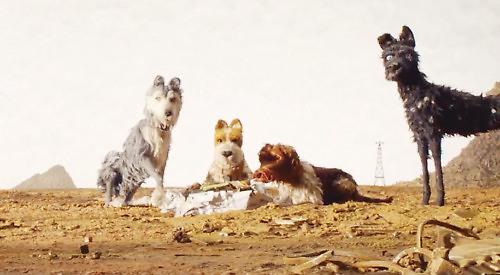 SOME directors deliver individual movies — others create whole worlds to play in.

Wes Anderson, the quirky, whimsical, irrepressible mind behind Rushmore, The Royal Tenenbaums, The Life Aquatic with Steve Zissou and The Grand Budapest Hotel, is definitely in the latter camp.

Ever since his 1996 debut Bottle Rocket, Anderson’s films have borne the unmistakable stamp of his eccentric imagination.

Populated with unforgettable characters and vivid, idiosyncratic detail, they often have the delightful feel of a sophisticated, witty short story ripped from the pages of the New Yorker during the age of SJ Perelman and Dorothy Parker.

However, he’s not a director to rush things, and the arrival of a new Wes Anderson film has become an event to be relished by cinephiles.

A full four years after his quadruple Oscar-winning Grand Budapest Hotel, Isle of Dogs — the director’s second movie filmed using stop-motion, following on from 2009’s rapturously received Fantastic Mr Fox — bounds its way into cinemas this spring. And it turns out to be an indisputably Andersonian trip.

The writer-director has been typically secretive about the film’s plot — although at this year’s London Film Festival, composer Alexandre Desplat (who wrote the music for that film, and Moonrise Kingdom in 2012) described it as “amazing, it’s Mr Fox on acid!”

With a cast of mostly canine characters, it’s set in a dystopian Japan 20 years in the future, in which the country’s pooches have been brutally exiled to a “trash island” after an outbreak of dog flu.

Twelve-year-old Atari Kobayashi’s mutt Spots is caught up in the quarantine and so the youngster embarks on a thrilling quest to save his pal, aided by the island’s four-legged prisoners.

Stop-motion film-making is tailor-made for Anderson’s visually unconventional style and fanatical obsession with detail, but this time the director’s influences stretch much further than the clay models of stop-motion maestro Ray Harryhausen.

“I always liked the creatures in the Harryhausen-type films,” he says, “but the new film is less influenced by stop-motion movies than it is by Akira Kurosawa.”

The film is previewing this Sunday at Henley’s Regal Picturehouse — starting with a dog-friendly screening at 11am.

Customers are invited to bring their well-behaved dogs along, where they will be provided with water bowls and blankets to sit on.