Cannes winner is drawn from life 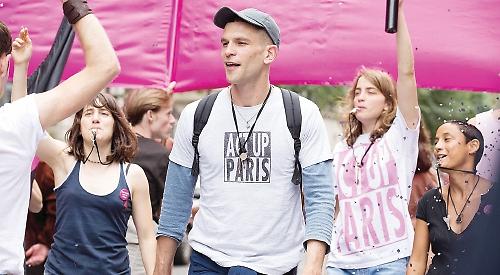 AN intimate epic set at the height of the AIDS crisis, Robin Campillo’s 120 BPM (beats per minute) is intelligent, dynamic, passionate — and as committed as its characters.

The film revolves around a group of Parisian AIDS activists who belong to the real-life French outfit ACT UP (AIDS Coalition to Unleash Power).

Both Campillo and his co-writer Philippe Mangeot were members — the latter even served as the president in the late Nineties — and the two have drawn on their experiences in writing the screenplay.

Early on, we see one side of ACT UP, when a pharmaceutical conference is overrun and members pelt the speaker with balloons filled with fake blood.

It won’t be the only time that Campillo splashes red across the screen. But this dramatic intervention isn’t to the taste of everyone in the group, which includes HIV-positive men and women alongside non-carriers, including well-meaning (if slightly misguided) parents of victims.

Debate is a notable characteristic of the film. Many scenes are set in the college lecture room, where the ACT UP members gather and raucously argue about campaign strategy. Campillo is no stranger to such a setting — he co-wrote Laurent Cantet’s Cannes-winning school-set The Class.

Here, it takes time before the film finally seeks out its main characters, Sean (Nahuel Pérez Biscayart), and newcomer to the group, Nathan (Arnaud Valois).

With his health rapidly deteriorating, Sean is unsurprisingly desperate for action against the seemingly apathetic drug companies — a radical approach that differs from that of the more passive group leader, Sophie (Adèle Haenel).

Argument fills the air in a film that pleasingly pays heed to the way political and social activism takes shape. But as dialogue-driven as the film is, Campillo’s use of image and sound is just as startling. A dream-like scene where the Seine turns blood-red is particularly notable, while the use of Bronski Beat anthem Smalltown Boy across one galvanising sequence is nothing short of inspired.

As the title hints, the rhythm of dance music is a life force that bonds many of these characters, and Campillo uses it to craft something vital and life-affirming, when he might so easily have slipped towards the maudlin.

Having won the Grand Prix at 2017’s Cannes Film Festival, 120 BPM emerges ultimately as a story about love and loss that brilliantly combines the personal and the political. This is not just a movie about campaigning, it’s about the indefatigable nature of the human spirit in the face of tragedy.

The film is on general release from Friday (April 6).