Horror movie has a hint of a hinterland 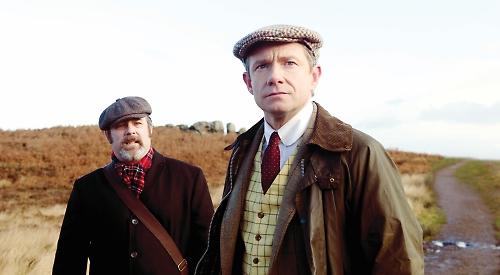 MARK Kermode thinks it’s the best film ever made, but for me The Exorcist is the genre-defining masterpiece that ended up killing the horror movie stone dead.

Once seen, it has the strange effect of rendering all other would-be scary films redundant. Cartoons desperately trying to cut it next to a Caravaggio.

The numbers don’t lie. In the 44 years since its release, The Exorcist has grossed almost two billion dollars (pun intended).

Kermode said: “There’s a theory that great films give back to you whatever it is you bring to them. It’s absolutely true with The Exorcist. Some people think it’s an outright horrorfest, but I don’t. It was written by a devout Catholic who hoped it would make people think positively about the existence of God. William Peter Blatty, who wrote the book, thought that if there are demons then there are also angels and life after death. He couldn’t see why people thought it was scary. I’ve seen it about 200 times and every time I see something I haven’t seen before.”

High praise — and a high bar for other filmmakers to clear. So when a new release is hailed as “the best British horror movie for years” it’s hard not to retort “What, since Lesbian Vampire Killers?”

It’s only a 15 certificate, after all — with key members of the cast being best known for their comedy roles.

The good news about Ghost Stories, though, is that it has a considerable hinterland, being based on the long-running stage play of the same name by Jeremy Dyson and Andy Nyman, who have also directed the film version.

Nyman stars as Professor Phillip Goodman, a debunker of all things paranormal who has devoted his life to exposing phony psychics and fraudulent supernatural claims on his own TV show.

His hard-won scepticism is put to the test, however, when he receives a file of three chilling and inexplicable cases: a night watchman (Paul Whitehouse) haunted by disturbing visions as he patrols an abandoned asylum; an edgy young man (Black Mirror’s Alex Lawther) involved in a hellish car accident deep in the woods; and a wealthy former banker (Black Panther’s Martin Freeman) visited by the poltergeist spirit of his unborn child.

Scarier still, each of the these macabre stories seems to have a sinister connection to Goodman’s own life. Will they make a believer of him yet?

Variety’s Guy Lodge says of the film that “the goosebumps it raises are real, and honestly earned”. You never know, even grizzled old Exorcist fans might enjoy it.

Ghost Stories is showing at the Regal Picturehouse cinema from today (Friday).