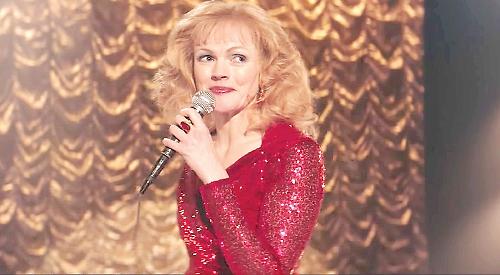 BACK in the un-PC days of the Seventies and Eighties, it took a brave woman indeed to enter the working men’s clubs that peppered the north of England’s industrial heartland.

Stand-up comedy was a men-only zone and a rough ride awaited any budding comedienne who dared to invade this male-dominated preserve. Yet a few formidable females strode in anyway, to insist their voices and jokes got heard.

It’s their histories that inform Funny Cow, a heartfelt portrait of pluck and persistence, full of salty northern humour and working-class grit.

The fabulous Maxine Peake plays the Funny Cow of the title — a young woman whose burning ambition to perform is only stoked by her difficult upbringing and occasionally volatile marriage to hard-drinking Bob (Tony Pitts). Some reluctant mentoring from ageing comedian Lenny (Alun Armstrong) gives her further encouragement, as does a tentative love affair with a bookshop owner, Angus (Paddy Considine). When the time comes, however, will she have the courage to take to the stage and make her mark? Authenticity was integral to Tony Pitts’s screenplay, which he describes as “an unsentimental commentary to a culture I grew up in”, and it’s something director Adrian Shergold bolsters by recruiting such real-life comic talents as John Bishop and Vic Reeves to make cameo appearances, as an Elvis impersonator and ventriloquist respectively.

It’s all in the service of a comedy drama that, according to Peake, “captures perfectly the atmosphere of the times”.

It’s also one that gifted the Dinnerladies actress “the role of a lifetime” — one based in part on Seventies trailblazer Marti Caine, but which also owes a debt to comic icons such as Victoria Wood and Julie Walters.

Another northern voice to whom the film owes a massive debt is Sheffield’s Richard Hawley, whose original compositions are woven through the story like a musical narration.

Hawley, a friend and former bandmate of Pulp’s Jarvis Cocker, lends a melancholic, ironic and wistful tone to the proceedings, not to mention some pitch-perfect period pastiches.

It all adds up to an intelligent and touching blast from the past, built around a splendid central performance from one of the UK’s leading actresses.

• Funny Cow is on general release.