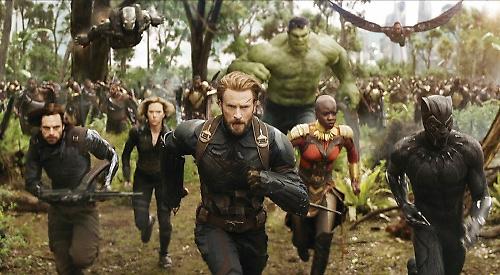 IT’S billed as the climax of the Marvel Cinematic Universe to date — with the proviso, of course, that there’s an as-yet-untitled sequel due out next year.

For the benefit of anyone who may have lost track over the course of the past 10 years and 18 previous films in the franchise, here’s what Avengers: Infinity War holds in store.

Scattered and divided after the events of Captain America: Civil War, the alliance of superheroes must rally to confront the intergalactic warlord Thanos (played by Josh Brolin) who is hell-bent on collecting the six Infinity Stones he needs to bend reality to his will.

Joined by newfound allies including the Black Panther, Doctor Strange and the Guardians of the Galaxy, the MCU’s long-serving heroes find themselves in the ultimate battle to save the cosmos.

Thought to be the second most expensive film ever made after 2011’s Pirates of the Caribbean: On Stranger Tides — which cost an
eye-watering $379 million — the good news for the film’s makers is that ticket
pre-sales have already outstripped the past seven Marvel movies combined.

Not everyone is such a fan, however. On a recent press tour to promote his new documentary series AMC Visionaries: James Cameron’s Story of Science Fiction, the legendary director voiced his frustration with some of the mega-budget sci-fi films of today.

“Not that I don’t love the movies,” he said. “It’s just, come on guys — there are other stories to tell besides hyper-gonadal males without families doing death-defying things for two hours and wrecking cities in the process. It’s like, oy!”

The creator of The Terminator and the director of Aliens and Titanic, Cameron is currently hard at work on the sequels to his 2009 smash Avatar, which became the highest-grossing film ever made.

He added: “We can see the market drives us to a sort of science fiction now that’s either completely escapist and doesn’t require a technical consultant — an example of that would be Guardians of the Galaxy. It’s just fun. We don’t care how those spaceships work or any of that stuff works. And then you have scientifically responsible science fiction like The Martian or Interstellar.”