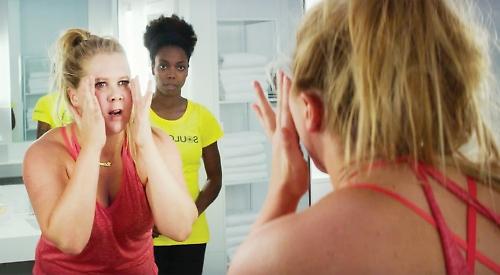 WHO hasn’t at some point in their lives wondered how differently things might have turned out for them if they were devastatingly physically attractive?

The answer, I suppose, being: those people who are, in fact, devastatingly physically attractive.

But then, thinking about it, that would depend on their being aware that they were so endowed.

And as Mike Skinner of The Streets memorably pointed in his 2004 UK number four hit Fit But You Know It, there is something a little off-putting about such people.

This is the paradox that lies at the heart of comedian Amy Schumer’s new film.

Written by Abby Kohn and Marc Silverstein, who also co-direct, I Feel Pretty tels the story of Renee Barrett (Schumer), a young, professional woman who struggles with debilitating feelings of inadequacy about her appearance — as a result of which she frequently apologises and has trouble getting people to pay attention to her or treat her with respect.

Renee works as the website manager for a large cosmetics company called Lily LeClaire. However, she resents the fact that her office is in a basement in Chinatown and not at the corporate Fifth Avenue headquarters.

Early on in the film, Renee learns that LeClaire is hiring for a new receptionist, but she does not see any point in applying because she does not feel she is confident or attractive enough to serve as the “face” of LeClaire.

Later that day, Renee attends a SoulCycle class at the gym but falls off her bike and hits her head.

On waking, she is unable to see her body as it actually is. Instead, when she looks in the mirror or at photographs of herself, she sees the most beautiful and capable woman on Earth looking back at her.

The head injury has gifted her a newfound confidence — feeling empowered, she becomes instantly happier and more energetic and as a result allows herself to interact with the world in a radically different way.

Shortly afterwards, during a visit to the dry cleaners she mistakenly believes that a man is hitting on her and exchanges numbers with him. Suffused with a positive attitude, she applies for the receptionist position at LeClaire and gets it.

A new life of personal and professional success beckons, but when Renee suffers a second bump to the head she awakes to the realisation that her outward appearance had never changed — and is forced to start coming to terms with who she is on the inside.

I Feel Pretty is showing from today (Friday) at Henley’s Regal Picturehouse cinema.