Han goes solo... but not for long 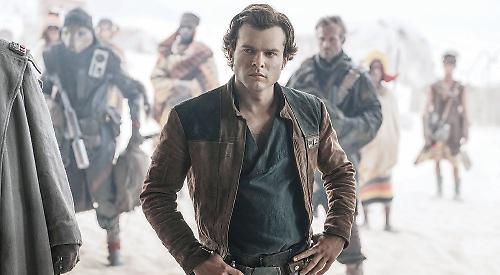 AS played by Harrison Ford, Han Solo is perhaps cinema’s greatest scoundrel. We saw his tragic and touching demise in Star Wars: The Force Awakens.

Now we learn the space cowboy’s origins in Solo, the second “standalone” Star Wars story after 2016’s Rogue One.

If the latter was a dark war movie Solo, as directed by Ron Howard, is a funny, edgy, irreverent romp, with more twists and turns than the Millennium Falcon in an asteroid field.

Set a decade or so before A New Hope, the action explores the start of some of the most celebrated relationships in the Star Wars universe.

We witness the first meeting between Han (Alden Ehrenreich, who beat 3,000 hopefuls to the role) and everyone’s favourite co-pilot, Chewbacca (Joonas Suotamo). In many respects, the film is the ultimate buddy comedy but between man and Wookiee.

Han will also encounter legendary gambler Lando Calrissian — the distinctly slippery customer we first encountered in The Empire Strikes Back.

Lando is now played by Donald Glover, aka musician Childish Gambino, lending the space smoothie an extra dash of style and cool (check out his capes and fur coat).

If you know your Star Wars lore, you will recall that Lando is the original owner of the Millennium Falcon. Solo will reveal how Han gets his iconic ride — shown here in a pristine condition before years of dodging the Empire/bounty hunters scuffed it up.

As well as old favourites, the film also introduces a raft of colourful new characters, mostly from the galactic underworld.

Flunking out of the Imperial Navy, young orphan Han turns to a life of crime to make his way in the world.

Along the way, he falls for the enigmatic Qi’ra (Game of Thrones’s Emilia Clarke) and crosses paths with career criminal Tobias Beckett (Woody Harrelson), who becomes a mentor for the young smuggler, and his imposing partner in crime, Val (Thandie Newton).

This is the milieu in which Solo operates — a seedy underworld where nobody knows who to trust. But it also delivers big laughs and action sequences new to the Star Wars universe.

If it’s a fast, daring unpredictable ride you’re after, you can count on Han Solo to deliver. Just never tell him the odds.