Short film has pre-festival screening at the Regal 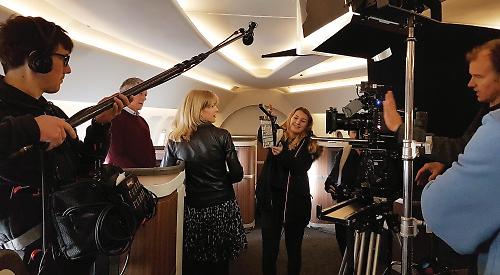 Earlier this year director Jo Southwell and writer Sophie Dix raised the money to produce Entrance No Exit — billed as “an OCD comedy short set on an aeroplane”.

The making of the film was supported by students from The Henley College’s media department, town councillors Dave Eggleton and Kellie Hinton, and local firms including Made For Drink, Cono Sur and IBS Office Solutions.

Jo, who recently attended the Cannes Film Festival, said: “This short film was a great experience because we only had 48 hours to shoot it. Lots of local people came on board and helped make this film happen — either behind the scenes or on the set as extras.” She added: “Many people who have watched my films know that I direct dark drama, so this year I made a change and opted for a female-led comedy. I hope you can come along and support this film and help us take to festivals around the world.”