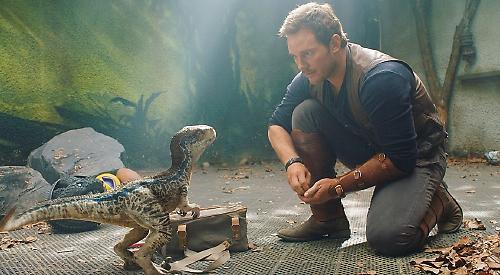 WHEN Colin Trevorrow’s Jurassic World was launched in 2015, it brought Steven Spielberg’s long-dormant dinosaur franchise roaring back to life.

Grossing $1.6bn, it crushed all comers to become the top summer blockbuster — so it’s no surprise that a fresh sequel is now pounding into cinemas.

Set four years on from the last film, when the Jurassic World theme park was torn apart by dinosaurs on the rampage, these prehistoric wonders are now fending for themselves on the abandoned Isla Nublar.

It’s at this point that (natural) disaster strikes, as the island’s volcano bursts back into life, threatening these genetically reborn creatures.

Together, they mount a rescue operation to find the remaining dinosaurs on the island. When they arrive, with the lava starting to erupt from the volcano, it’s as if they’re in the land that time forgot. With Owen desperate to find Blue, the lead female raptor that he hand-reared, it becomes a race against time — made all the more explosive when the expedition discovers a conspiracy that jeopardises mankind.

At the helm of Jurassic World: Fallen Kingdom is the Spanish director JA Bayona, who has a remarkable track record with both suspense thrillers (The Orphanage), and visual effects (The Impossible, which recreated the 2004 Indian Ocean tsunami and its after-effects with incredible realism).

The script is co-written by Trevorrow and Derek Connolly, who together penned Jurassic World, and fans will also be heartened to know that Spielberg remains on board as executive producer.

In the cast, there’s even a British contingent, with the ever-excellent actors Toby Jones and Rafe Spall joining the dino-fun.

Also returning for this instalment is Jeff Goldblum, who plays chaos theory specialist Dr Ian Malcolm. In his first appearance in the franchise since the original two films by Spielberg, he ominously warns the world, “These creatures were here before us. If we’re not careful, they’ll be here after.”

But really the stars are those dinosaurs, created with jaw-dropping skill by the visual-effects wizards at Industrial Light & Magic. Watching them tear up the screen just never gets old.