Talent for robbery runs in the family 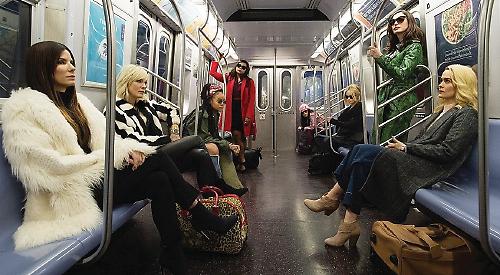 AS far as gimmicks for rejuvenating a film franchise go, flipping the gender of the main cast has to rank among the simplest and most straightforward.

Yet it can also be pretty effective under the right circumstances — like, say, when you’re trying to squeeze a spin-off out of a film series that revelled in the glamorous machismo of a more or less all-male ensemble.

It turns out that targeting wealthy marks runs in the family, and so does rounding up partners in crime who are as dazzlingly charming as they are morally flexible.

Following her release from prison, Debbie recruits a crew of eight, including Cate Blanchett as Lou, her right-hand woman, to carry out an unbelievably ambitious heist at New York City’s glitzy annual Met Gala.

All eyes are on the $150 million diamond necklace worn by celebrity Daphne Kluger (an ultra-glam Anne Hathaway) as the savvy women-only squad stage a robbery like no other — all the while attempting not to raise a single eyebrow.

Inspired by her late brother’s example, Debbie spends the long months in jail dreaming up the perfect heist.

We are then shown via a flashback that Debbie’s former lover Richard Armitage (The Hobbit, Spooks) had involved her in a fraud before testifying against her, so who better to use as a fall guy? James Corden as the investigator looking into the theft promises some comic relief.