Writer-director aims to do Wilde justice 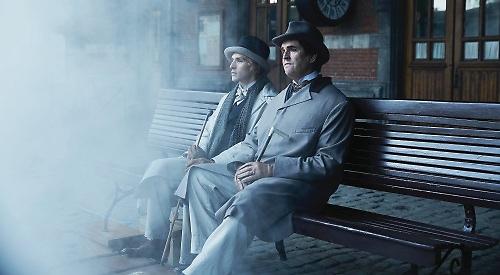 RUPERT Everett makes his triumphant directorial debut with The Happy Prince, recounting the final years of Oscar Wilde who, following a terrible prison sentence in Reading Gaol, is living in exile in Europe.

The film opens in France, where Wilde (Everett) is living in disgrace after his affair with Lord Alfred “Bosie” Douglas (Colin Morgan). Wilde has few friends who will still associate with him, but some remain loyal — including his literary executor Robbie Ross (Edwin Thomas) and friend Reggie Turner (Colin Firth).

With a playful use of flashbacks, Everett gives a non-linear approach to the literary giant’s life. From watching Wilde on his death bed in a Parisian fleapit, we are transported in the next moment to happier times, as Wilde reads to his two sons from his collected short stories. One of these stories is The Happy Prince, from which the film takes its name. It is the tale of a gilded statue that gives away its jewels to a sparrow, and in the process learns the true meaning of sorrow.

This children’s story is used by Everett throughout the film, and in turn it becomes a metaphor for Wilde’s life.

The writer went from literary starlet and darling of London high society to a shamed pariah, losing his home, his wife and his children.

In many ways, this is the perfect project for actor-writer-director Everett, who previously played Wilde in David Hare’s much-praised The Judas Kiss in 2012.

Everett also has intimate knowledge of Wilde’s plays, having given two memorable performances in Oliver Parker’s adaptations of The Importance Of Being Earnest and An Ideal Husband. Both films demonstrate Everett’s seemingly effortless ability to capture the cut and thrust of Wilde’s witty dialogue.

With The Happy Prince, Everett builds on his stage and screen performances, and imbues Wilde’s own story with a sense of tragic majesty, capturing the playwright’s attempts to eke out a few moments of pleasure, in spite of his poverty and poor health.

Unlike previous films that have explored Wilde’s life, such as Stephen Fry’s 1997 biopic, or Ken Hughes’s The Trials of Oscar Wilde, Everett’s film openly wrestles with the tragedy of Wilde’s life.

He shows us the homophobic treatment Wilde received from British expats — which added to his tragic sense of loneliness — as well as the results of his reunion with Bosie, with whom he was so infatuated.

Although The Happy Prince depicts the downward spiral of Wilde’s last years, it is a film full of determination and fuelled by a triumphant spirit.

Everett offers audiences a love letter of a film, giving a fittingly moving and empathetic tribute to one of our greatest playwrights.

The Happy Prince is showing at Henley’s Regal Picturehouse cinema from today (Friday).