Pixar faves pick up where they left off 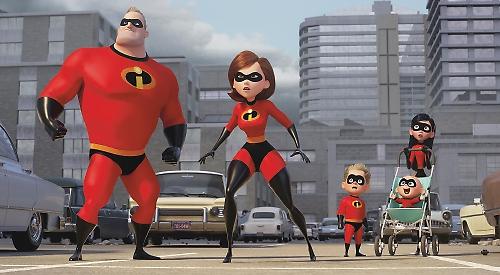 IT’S been 14 years since we first met the Parrs, the family of everyday superheroes who saved the day, and the world, in Brad Bird’s The Incredibles.

Released in 2004, it grossed over $633 million worldwide, and became the second of nine Pixar titles to win the best animated feature Oscar.

The Parrs, you’ll recall, were a happy brood made up of invincible strongman Mr Incredible (aka Bob), endlessly flexible Elastigirl (aka Helen), and their three children: Violet, who can make herself invisible and generate protective force fields; Dash, a bundle of energy with the ability to run amazingly fast; and Jack-Jack, a gurgling babe in arms who, like us, is only just starting to realise what he might be capable of.

The original film also introduced us to Bob’s pal, Lucius, who — in the dashing guise of Frozone — could magic ice out of thin air. Oh, and we also got to meet Edna Mode, the pint-sized designer of the Incredibles’ costumes, who ensured everything that they did was done with style.

All of our favourites are present and correct in Incredibles 2, which picks up exactly where its predecessor left off by pitting our heroes against the dastardly Underminer.

The story proper, however, begins with a role reversal that sees Elastigirl assuming superhero duties while Bob stays home and minds the kids.

As Mr Incredible, he’s successfully battled nefarious villains, criminal conspiracies and enormous metal robots. How will he cope with reading Jack-Jack a bedtime story and helping Dash with his homework?

It’s the mix of all-action adventure, retro nostalgia and relatable family dynamics that makes Incredibles 2 such an appealing proposition.

Yet returning director Bird has some fresh tricks up his sleeve, too, thanks to a host of new characters who are set to give Bob (Craig T Nelson), Helen (Holly Hunter) and Frozone (Samuel L Jackson) a run for their money.

Bob Odenkirk plays Winston Deavor, a telecommunications tycoon on a mission to bring “supers” back into the spotlight — an ambition he shares with Ambassador (Isabella Rossellini).

Also along for the ride are Winston’s sister, Evelyn, a tech-savvy genius voiced by Catherine Keener, and an eager young super called Voyd (Sophia Bush), whose powers enable her to make objects appear and vanish at will.

Small wonder expectations are sky-high for a sequel that looks guaranteed to be Pixar’s 20th straight hit — with or without capes.