Mega-sequel takes us back to the start 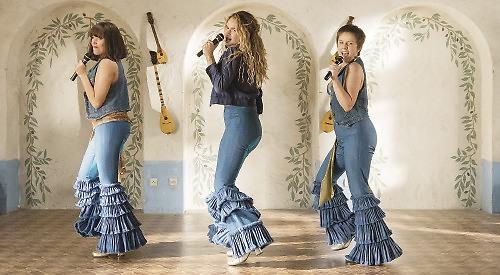 IN 2008 Mamma Mia! turned a theatrical smash hit into a cinematic phenomenon.

Its mix of Abba’s stunning musical history, beautiful sun-kissed locations, relationship shenanigans and the sight of an A-list cast cutting loose and having a blast, turned it into (at the time) the biggest hit in UK box-office history.

It was so joyful, exuberant and infectious that a sequel was inevitable. Exactly 10 years later, with all the original leads returning, here we go again…

Written and directed by Ol Parker, whose screenplay for The Best Exotic Marigold Hotel mines a similar seam of charm and fun under the sun, Mamma Mia! Here We Go Again picks up 10 years on, with Sophie (Amanda Seyfried) now pregnant.

Her mother’s confidantes, Rosie (Julie Walters) and Tanya (Christine Baranski), are called in for moral support and the film begins to flit between past and present, as Sophie learns the trials her own mother, Donna, went through — and how those lessons could help solve her own worries.

Parker has assembled a fantastic cast to play the younger selves of the original film’s characters.

Lily James, so good in Kenneth Branagh’s Cinderella and Edgar Wright’s Baby Driver, fills the dungarees of Meryl Streep’s Donna, while Jeremy Irvine, who played a younger Colin Firth in The Railway Man, this time gets to play a younger Pierce Brosnan as Sam. Colin Firth’s Harry is essayed by Hugh Skinner, who does an endearing, Firth-esque line in British diffidence as the bumbling intern, Will, in BBC comedy W1A. Rising Brit star Josh Dylan, seen in Robert Zemeckis’s Allied and Lenny Abrahamson’s The Little Stranger, takes on Stellan Skarsgård’s Bill.

New to the high jinks are Andy Garcia, Celia Imrie as the vice-chancellor of the university that Donna, Julie and Tanya attend and, in perhaps the casting coup of 2018, Cher adds unfeasible glamour as Ruby, Sophie’s grandmother. The singer coincidentally appeared in Abba’s last video and hasn’t been seen on screen since 2010’s Burlesque. In one of those amazing magic-of-the-movies facts, she plays Donna’s mother, despite being only three years older than the 69-year-old Streep.

Many acts could barely fill one musical, let alone a sequel, but Abba’s back catalogue has jewels to spare. Fernando (performed by Cher), Angel Eyes, I Wonder and When I Kissed The Teacher all get a first airing. Plus, listen out for some new interpretations of classics — Lily James’s slowed-down interpretation of the title song is gorgeous.

Like the film itself, it’s what you know and love, but with a fresh twist. To paraphrase the lyric — My, my, how can we resist you?

• The film is showing at the Regal Picturehouse cinema from today (Friday).