Buried childhood is difficult to bear 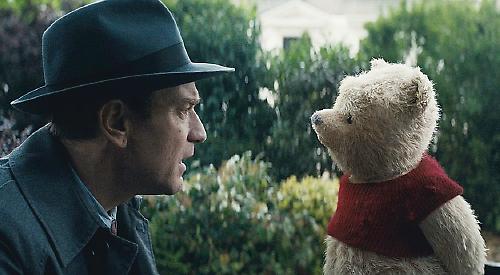 IT’S only a short while since cinemagoers were being invited to bid Christopher Robin “Goodbye” — now here he is again.

Now grown up and living in the city, Christopher Robin (McGregor) finds it difficult to find time for his family while working for a firm of luggage makers.

Just as things are starting to get on top of him, his childhood friend Pooh (voiced by Jim Cummings) appears looking for his help, having lost all of his friends.

The pair head back to the Hundred Acre Wood, where Christopher helps Pooh locate his missing pals and the pair are reunited with Tigger (Cummings again), Eeyore (Brad Garrett), Rabbit (Peter Capaldi) and Piglet (Nick Mohammed).

However, the animals soon see that their friend has lost his imaginative sense, and when he heads back to the real world Pooh and the rest of the gang decide to repay Christopher by helping him rediscover his love of life.

The film co-stars Hayley Atwell as Christopher’s wife Evelyn, Bronte Carmichael as his daughter Madeline and Orton O’Brien as the young Christopher Robin — who we meet at the start of the film just as he is leaving for boarding school.

The occasion prompts his friends from the Hundred Acre Wood to throw him a goodbye party.

Gathering at their usual spot, Christopher Robin comforts Pooh and tells him he will never forget him.

But his experiences of school and the death of his father later lead him to grow up more quickly than he would have liked.

After serving in the British Army in the Second World War — the point at which last year’s Goodbye Christopher Robin left off — McGregor’s Robin finds himself working as an efficiency expert for Winslow Luggages.

But with the firm hitting hard times due to the post-war slump, the job grows ever more demanding and Christopher finds himself spending more and more time in the office, neglecting his young family in the process.

The crisis point comes when his boss tells him to cut costs by 20 per cent or risk huge layoffs at the firm.

This forces Christopher to pull out of a family trip to their Sussex cottage — close to the magical door to the Hundred Acre Wood of his childhood.

A flawless blend of live action and CGI, one critic called this “a film that melts your heart in its first five minutes” while another noted that it works best when highlighting the conflict we all go through as we grow up and lose touch with the child we used to be.

Woven through with Disney magic, Christopher Robin reminds us that the children we were are still within us, deserving of all the love and happiness this world has to offer.