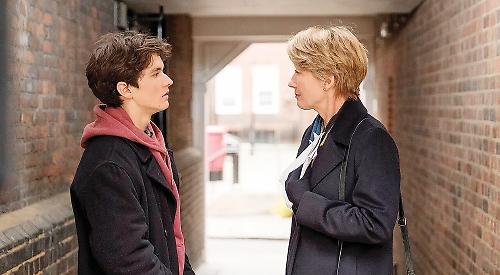 AWARDED a damehood for services to drama in the Queen’s most recent birthday honours, Emma Thompson is now officially a national treasure — as if we didn’t know that already.

And she’ll need to clear yet more space on her mantelpiece, judging by her characteristically eloquent and committed performance in The Children Act.

Can it really be 25 years since Thompson carried off the best actress Oscar for Howards End? A second nomination swiftly followed for The Remains of the Day — shortly after which she won the best adapted screenplay Oscar for her work on Sense and Sensibility.

However, on becoming a mother in 2000, this quintessentially English actress took a conscious decision to reduce her acting workload in order to spend more time with her family. So it’s perhaps unsurprising to note that her filmography this century is so far largely united by themes of children and childhood. Her last leading role was as PL Travers, the creator of Mary Poppins, in 2013’s Saving Mr Banks.

The Children Act marks Thompson’s return to serious adult drama. Based on the 2014 novel by Ian McEwan and adapted for the screen by the author himself, this London-set story casts Thompson as Fiona Maye, a leading High Court judge presiding over cases in the family court.

Her expertise lies in the thorny ethical dilemmas brought under the 1989 Children Act, where the aim is to rule in the best interests of the child.

The latest case before her is that of 17-year-old Adam (Fionn Whitehead) who is in a critical condition in hospital. His parents are Jehovah’s Witnesses, a faith Adam testifies that he shares, and as such they refuse a blood transfusion that doctors say could save his life.

It’s a complex and fulfilling role for Thompson, who commands almost every scene. Her performance is not merely compellingly strong, but also nuanced and moving.

Judge Maye’s job may be extraordinary, but her personal struggles are relatable to those of any successful woman trying to balance work and home life.

Not that The Children Act is solely the Thompson show. Her neglected husband is played by Stanley Tucci, who alone is usually a reason for seeing any film he appears in.

Those who recall him as Mr Meryl Streep in Julie & Julia will particularly enjoy this portrayal of a very differently devoted partner.

Pulling it all together is acclaimed theatre director turned film director Richard Eyre, who delivers another highly sophisticated and intense drama for thinking grown-ups.