Lee’s award-winner goes under the hood 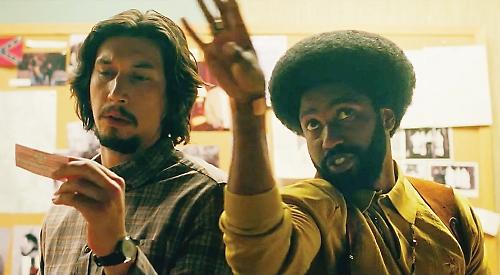 THE first time a Spike Lee film played in competition at the Cannes Film Festival, he expected it to win the Palme D’Or.

Instead, Do The Right Thing lost out to Steven Soderbergh’s 1989 hit Sex, Lies, and Videotape — and, although Lee returned two years later with Jungle Fever, netting Samuel L Jackson the Best Supporting Actor award, the disappointment never really went away.

So it was with some surprise this year that, nearly three decades later, the director entered BlacKkKlansman — a show of bravado that paid off, and saw him leave town with both the Grand Prix and a rare broad smile.

With BlacKkKlansman, which is produced by the Oscar-winning team behind Get Out, it seems Lee has finally rediscovered his mojo, finding the perfect material for his kinetic, playful, but grounded style.

Although it’s funny, slick and gifted, with the director’s uncanny ear for just the right tune, Lee’s latest comes with something to say at the exact moment it needs saying. This is the Spike Lee we remember — the versatile firebrand of the Nineties.

For all its timeliness, however, BlacKkKlansman is a story from the past. Set in the late Seventies, with outfits retrofitted to perfection, BlacKkKlansman tells the strange-but-true story of Ron Stallworth (John David Washington, son of Denzel), an African-American cop in the predominantly white district of Colorado Springs.

Stallworth is quickly bored and demands a transfer to the undercover division, where he starts by infiltrating a Black Power meeting in the city.

His next assignment is his own, however. Seeing an advert in a magazine, Stallworth creates a raging, racist, blue-collar alter ego for himself, and applies to join America’s most notorious organisation — the Ku Klux Klan.

Somewhat to his surprise, Stallworth is accepted, and sets about recruiting his Jewish co-worker, Flip Zimmerman (Adam Driver) to take his place in face-to-face meetings.

It’s a bizarre premise, and Lee handles it accordingly, framing Stallworth as a Shaft-like dandy in a deliberately stylised film that aims for the funky, low-key efficiency of Seventies blaxploitation movies.

As a gambit, it’s surprisingly powerful: the moral shading in this world is literally stark black and white, as Stallworth gets closer and closer to a showdown with Klan grand wizard David Duke (Topher Grace).

The detective story is gripping enough by itself, with an effortlessly likeable performance from Washington in the lead, and an equally impressive supporting turn from Driver as his sidekick.

But in the closing moments, Lee turns up the volume — segueing straight into disturbing recent events in America’s chequered history. It may not be subtle, but, like Lee at his incendiary best, it hits all the way home.