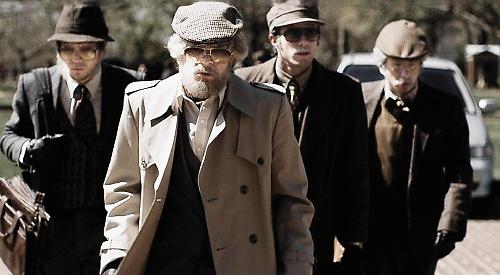 It’s a question that British director Bart Layton pushes to an extraordinary degree in his second feature film — an intriguing blur of fact and conjecture that explores every stage of the caper-turned-car-crash now known as the Transy Book Heist.

Masterminded by a weed-smoking student back in 2004, the plan involved stealing from the library at the Transylvania University, whose collection of rare natural history books — including a first edition of Charles Darwin’s On the Origin of Species — had been valued at $20 million.

They imagined it to be a simple, victimless crime, but real life had something else in store.

As true-crime stories go, it’s the kind that lends itself to the big screen, either as an insightful documentary about the human condition, or as a gripping, Tarantino-esque thriller about four amateurs getting in way over their heads.

What’s interesting about American Animals is that Layton has made both of those films for the price of one — just as his debut, The Imposter, fused real-life testimony with dramatic reconstruction to tell the jaw-dropping story of a serial French fraudster who passed himself off as a missing American boy.

From the start, Layton juggles two timelines: one in which the heist is played out as fiction, and another in which the four participants reflect on their behaviour. At key moments he even fuses them, heightening the story’s dark surrealism.

It helps that Layton has assembled a guileless cast to ease us into the chaos, putting American Horror Story’s Evan Peters as Warren Lipka, the ringleader of the group.

Alongside him, Barry Keoghan’s Spencer Reinhard is the best friend who unwittingly eggs Lipka on, and the initial stages of the film are electric and joyful, as the friends bone up on classic heist movies including Kubrick’s The Killing and Tarantino’s Reservoir Dogs in a bid to commit the perfect crime.

But as the day of the hit gets closer, the mood changes from excitement to dread, and in the heat of the actual moment the tension becomes almost unbearable.

It’s here that Layton’s film becomes something very special, and why it has played to rave reviews at film festivals internationally.

Many other directors would abandon these boys at this point and switch to a more sympathetic viewpoint, but Layton forces us to see matters through from start to finish, until the lows dramatically outweigh the highs.

It’s a human approach that really takes us inside the story, in which there really are no bad guys as such, and yet no good comes of it.

In the modern age, it’s a timely reminder that people need boundaries, and that a moral compass is easy to mislay.