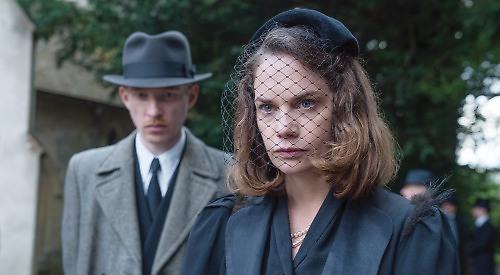 JUST as Keeley Hawes’s compelling turn as the home secretary in the BBC’s hit Sunday night drama Bodyguard has served to remind us of the excellence of her breakthrough role in 2002’s Tipping the Velvet, along comes another Sarah Waters adaptation.

The setting of director Lenny Abrahamson’s big screen treatment of The Little Stranger — a decaying country estate — in turn calls to mind that of Waters’s other great success, Fingersmith, which the South Korean filmmaker Park Chan-wook recently adapted as The Handmaiden.

During a dusty post-war summer in rural Warwickshire, country GP Dr Faraday (Domhnall Gleeson) is called to attend to a patient at lonely Hundreds Hall.

Home to the Ayres family for more than two centuries, the Georgian house, once grand and handsome, is now in decline — its masonry crumbling, its gardens choked with weeds.

The Ayres family — mother, son and daughter — are clearly struggling to keep pace. But are they being haunted by something more sinister than a dying way of life?

As he takes on his new patient, the doctor has no idea how closely, and disturbingly, the Ayreses’ story will become entwined with his own.

As the film progresses we learn that as a boy, Faraday — whose first name we are not told — had been admitted to the house for a party. Enamoured of the decor, he broke off an ornamental acorn from the wall display, causing his mother to strike him in punishment for vandalism.

On arriving at the estate, Faraday observes that the house has decayed over the years and that the family is in severe financial straits — a not altogether uncommon predicament faced by the owners of large estates in the years after the war.

During a house party where Faraday is present, a couple brings their young child, who is mauled by Caroline’s ancient and previously gentle Labrador retriever.

Roderick later tells Faraday there is a supernatural force at work in the house that hates him — the “little stranger” of the title — a declaration the doctor at first takes as evidence of his patient being of unsound mind.

Waters’s unashamedly gothic tale borrows from the greats — Henry James, Shirley Jackson, Wilkie Collins, and Edgar Allan Poe. But it remains to be seen whether the ending proves too ambiguous for modern cinema audiences.