Glenn could come close... to an Oscar 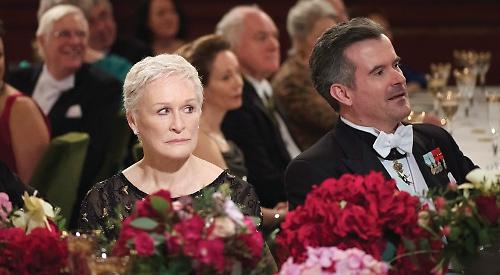 FROM Alex Forrest in Fatal Attraction and the Marquise de Merteuil in Dangerous Liaisons to Norma Desmond in Sunset Boulevard and Patricia Hewes in Damages, Glenn Close has spent the last 40 years breathing life into complex and unforgettable female characters on both the screen and the stage.

To that list we can now add Joan Castleman, the title character in Björn Runge’s gripping film about an acclaimed author of fiction and the woman who has lived her adult life in his shadow.

Joe Castleman (Jonathan Pryce) has just found out he is to be the recipient of the Nobel Prize for Literature. It’s a time for celebration, particularly for the loyal wife he first met when she was a student of his at university.

Yet as Joe and Joan set off for the award ceremony in Stockholm, storm clouds start to brew.

Has Joan finally tired of her husband’s preening arrogance, infidelities and coldness towards their son David (Max Irons)? Or has she spent so many years nurturing her husband’s success that she has forgotten how to be the woman she once was?

Flashbacks to Joan’s youth, featuring Close’s own daughter Annie Starke as her younger self help tease out the mystery that lurks beneath her dignified composure — an enigma that Nathaniel Bone (Christian Slater), a sly hack intent on writing Joe’s biography, is determined to unravel.

Elsewhere in the story, Downton Abbey star Elizabeth McGovern contributes a well-crafted cameo as an author who gives the young Joan some hard truths to swallow.

Pryce, meanwhile, offers a wonderfully pompous portrayal of a respected man of letters who, for all his displays of diffidence and humility, is only too happy to be fêted and admired.

Ultimately, though, The Wife is a chance for Close to give one of her most riveting and forceful performances — no mean feat for an actress with two Golden Globes, three Tony awards and six Oscar nominations under her belt.

Based on the 2003 bestseller by Meg Wolitzer, whose latest novel, The Female Persuasion, came out earlier this year, it’s a film with much to say about the writing process, literary celebrity and the secrets that underpin any relationship.

Having rising star Starke portray Joan as a young woman adds an intriguing aspect to the film’s focus on family, as does casting Irons — the son of Close’s Reversal of Fortune co-star, Jeremy — as her offspring.

With Runge’s insightful direction, Jane Anderson’s finely tuned screenplay and a captivating score by Britain’s Jocelyn Pook, it’s the cinematic equivalent of a page-turner — one that will have you hooked from start to finish.

The Wife is now showing at Henley’s Regal Picturehouse cinema.