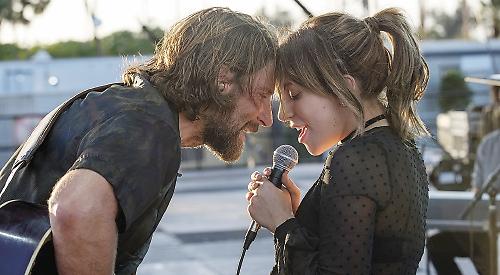 WHETHER starring Janet Gaynor and Fredric March in 1937, James Mason and Judy Garland in 1954 or Barbra Streisand and Kris Kristofferson in 1976, A Star is Born — an epic romance about a seasoned performer and a talented novice meeting at a pivotal juncture in their lives — has always spoken to huge audiences.

It’s a story that bears more than one retelling, although you certainly don’t have to be acquainted with any of the previous versions to appreciate its latest incarnation, in which Bradley Cooper not only stars but makes his directorial debut.

Taking the Oscar-winning 1976 movie as its primary inspiration, the 2018 film sees Cooper playing seasoned musician Jackson Maine, who discovers — and promptly falls in love with — struggling artist Ally (Lady Gaga). She has just about given up on her dream to make it big as a singer until Jack coaxes her into the spotlight.

However, as Ally’s career takes off, the personal side of their relationship begins to break down, as Jack fights his own internal demons.

Although Lady Gaga (real name Stefani Germanotta) has acted before — in Sin City: A Dame To Kill For, Machete Kills and TV’s American Horror Story — A Star is Born marks her first lead role in a major feature film.

The story goes that when she screen-tested for the role, Cooper produced a make-up wipe before personally removing the concealer, mascara and lipstick she was wearing.

Needless to say, she got the part. Before accepting it, however, she had a condition — that all of their performances be shot live.

Cooper gamely complied, taking guitar and singing lessons for 18 months in order to pass muster as a professional rocker.

Not only that, but some key scenes were shot at various music festivals across the world, in which he sang and played for real in front of up to 80,000 people.

Lady Gaga, meanwhile, kept herself busy by writing songs for the film with established artists such as Lukas Nelson, Jason Isbell and Mark Ronson. Small wonder that people are tipping A Star is Born to be a breakthrough movie for a singer who already has one Oscar nomination under her belt for Til It Happens to You, the song she penned for 2015 documentary The Hunting Ground.

Cooper, of course, is no stranger to Oscars success, having been recognised for his contributions to Silver Linings Playbook, American Hustle and American Sniper.

You wouldn’t be at all surprised if, thanks to A Star is Born, both Cooper and his leading lady have something to celebrate at the next Academy Awards ceremony.